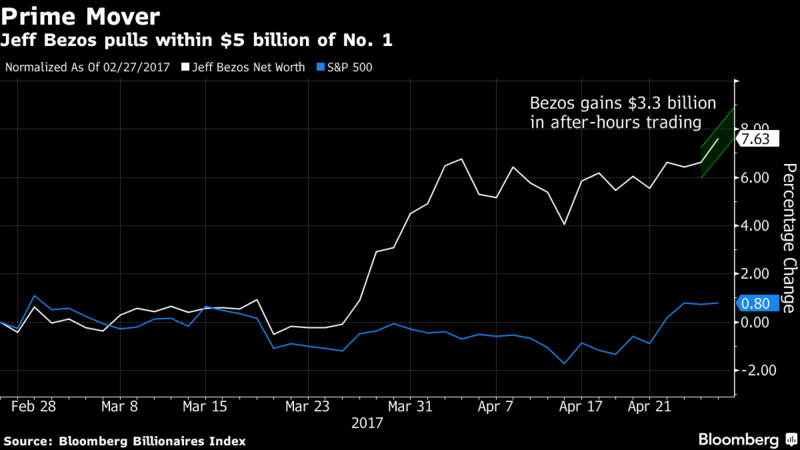 A rush in after-hours trading for Amazon.com Inc. has added $3.3 billion to the wealth of Jeff Bezos, Amazon’s founder. This means he is just $5 billion shy of becoming the world’s richest person.

Bezos’s fortune has gone above $80 billion for the first time, says the Bloomberg Billionaires Index. Jeff Bezos is 53-years old. He has increased $65.2 billion to his net worth after the debut of his index in March 2012 and as of Thursday, he had a net worth of $79 billion. If the gains continue at this rate, Bezos’ net worth will be beyond $80 billion in the index for the first time. Amazon shares increased around $50 after it forecasted sales that may defeat predictions in the current quarter. This will be an unbroken 20-year continuation of double-digit revenue growth. The first-quarter sales for Amazon were $35.7 billion and earnings were $1.48 a share, which beats the expectations of Wall Street analyst. Shares closed at $918.38 on Thursday and were as high as $965 after hours. Bezos has made more after-hours than those experienced by Google co-founders Larry Page and Sergey Brin. Page and Brin increased $1.4 billion when the shares of Google’s parent company Alphabet Inc. went to $938.18 after the news that the smartphone advertisement business aided Alphabet in posting revenue of $20.12 nl and net income of $7.73 per share. Page’s worth is $44.7 billion and Brin’s is $43.7 billion. They are the 11th- and 12th-richest people in the world as of Thursday. Microsoft’s co-founder Bill Gates has been on the top of Bloomberg’s index since May 17, 2013. His wealth reduced by $200 million to $87.1 billion when Microsoft showed mixed results and declining tablet sales growth. 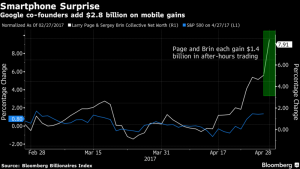 These are exciting times for Amazon and Jeff Bezos. It is a historic moment to be named the world’s richest man. Let’s see if Bezos is actually able to clinch that title.

What do you think of Bezos’s success? Let us know in the comments below.