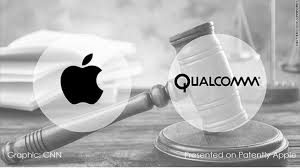 It has been no secret that Apple and Qualcomm are at war with each other. The reason being that Apple is refusing to pay the royalties to Qualcomm. Why Apple refuses royalties to Qualcomm is a complicated question with a long answer. Apple has not out rightly said that it would not pay anything to Qualcomm, it has said that it is waiting for the verdict from the court in their lawsuit and will only pay once the verdict is passed about the amount that needs to be paid. Of course Apple is expecting that after the court order ot would have to pay an amount that is quite less then what Qualcomm is charging right now.

If you are not tuned to this very public fight between the two technology giants, let us fill you in. So we all know what Apple is. QUALCOMM is another tech authority organization that provides chipsets for the leading mobile companies of the world. Apart from the earning from its chipsets, Qualcomm also has the ownership of a number of patents regarding mobile designs and WI FI structures. So all mobile phone manufacturers need to pay them a lot of money in the form of royalties to get the patents. Now some organizations believe (and to an extent rightly so) that these too many patents should not be in the ownership of one organization. That is why Apple has sued the organization Qualcomm and it is expecting positive results. Qualcomm on the other hand is of the view that until the verdict comes Apple should pay them the full fees.

As Apple is using chipsets made by Qualcomm’s competitors, it is being charged to pay much more royalties than other organizations. According to Apple, Qualcomm is asking them to pay $ 1 billion. Such an amount for a patent, does sounds ridiculous. Let’s see how the matter unfolds. Until then Apple refuses royalties to Qualcomm, and both Apple and Qualcomm will remain at loggerheads and we will keep you updated about the latest in their drama.