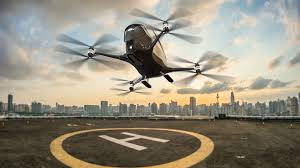 In a rush? Traffic jams will not let you reach your destination on time? No problem! Not for those in Dubai at least! Dubai Dubai has announced  another pioneering initiative: a fleet of flying taxis. And guess what, the air taxis will be driver less! You will be able to get anywhere you need to be in a nick of time!

Air Taxis Set To Be Launched in Dubai!

The air taxis are small enough to be able to fit in a car parking lot when folded up. The one-seater passenger drones has been made by the Chinese company Ehang. It is all set to start picking up passengers in July. It has been named Ehang 184. It is driverless, and powered by electricity.  They have already been spotted flying above the sand dunes near  airfield during test flights. It provides a practical  solution to challenges the transportation industry faces. The air taxis were unveiled during the 2016 CES gadget show in Las Vegas, America.

The venture is part of a strategy to have self-driving vehicles account for a quarter of journeys made in Dubai by 2030. Dubai wants to be the smartest city in the world. The drones, Autonomous Aerial Vehicles (AAV) are easy-to-use and can transport up to 100 kilograms which is enough for one person and one suitcase. The route will be pre programmed. The passenger will have to pick the destination through a smart screen in the drone and the rest of the affairs will be taken care of by the drone. 184 stands for one person, eight propellers, four arms. It will move at 100 kilometers per hour. The routes will be programmed by a ground control center via an encrypted 4G network, which will monitor the flight.

There are some limitations to the technology.There is a 30-minute maximum battery time so long distances can’t be covered. There are concerns about drones in busy airspace and also about the safety of driver less vehicles. Automated passenger drones might become a reality in near future.
There are both pros and cons of the driver less technology. What will happen if ground control loses the connection to the drone?There is a technology to send a signal to an aircraft, control it and communicate with it. If the technology is disrupted, the drone will  land at the nearest safe spot.

After ride hailing services Uber and Lyft, air taxis seem to be the new breakthrough in the transportation industry. What remains to be seen is that how it will pan out and which person will be daring enough to be the first customer of the air taxi. If this venture is successful in Dubai, we might see similar ones in more places in the near future.

Will you consider going on the air taxi or will it to be too risky? Should more vehicles be driver less? Let us know in the comments section below!