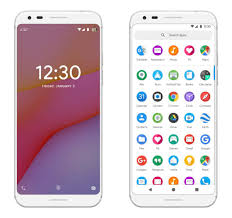 There are two kinds of phone enthusiasts: iPhone fans and Android fans. For the iPhone fans, iPhone 8 is the much-awaited phone right now. For the Android fans, Google Pixel 2  and Pixel 2L are the most exciting, upcoming phones.

Google has launched a third development preview version of Android O and the SystemUIGoogle.APK file line of code called “doze_always_on”, which means that Google Pixel 2 or will be equipped with an active display screen. It is reported that “doze” does not mean the battery’s energy-saving mode, but the active display (Ambient Display), means that the new Pixel intelligent machine may allow users to enable the Always-on (Always-on) display. It now appears that Google is also interested in enabling this feature on future Pixel 2. Despite the current little knowledge of the details, it is expected that Google may use a similar Samsung burn-ins (burn-ins) measures, which means each time the clock, date, notification and other content to move a few pixels. According to earlier news, Google plans to launch three Pixel series of mobile phones this year, code-named Walleye, Muskie and Taimen, of which Walleye will be named Pixel 2, and Muskie will be named Google Pixel XL. It is rumored that Taimen will have a large display and will be named Pixel XXL. The latest news is that the code “Muskie” has been called off. So this year, Google will release two Pixel phones. Some specifications of “Taimen” were leaked on the site Geekbench, including pre-installed Android O system and 4GB of memory, and Snapdragon 835 processor, etc., as single and multi-core run points with Samsung GALAXY S8 and other models in between. Leaks of the renderings show that a new generation of Pixel will have rounded full-screen design. The fingerprint recognition is still located on the back of the phone.In addition, the machine may have the facial unlock, iris recognition technology, and cancel the 3.5mm headphone jack. It is expected to be dust and water resistant.

In addition, Rick Osterloh, head of Google’s hardware division, said the next-generation Pixel phone is expected to be released this fall, and this series of mobile phones will keep the pace of the year’s update. At the same time, Rick Osterloh stressed that they will not launch cheap models, and will adhere to the high-end line.

Also Read: Google Pixel 2 Looks Set To Provide A Better Experience Than Samsung and Apple According To These Leaks

Are you camp iPhone or camp Android? Are you eagerly waiting for Google Pixel 2? Let us know in the comments below!