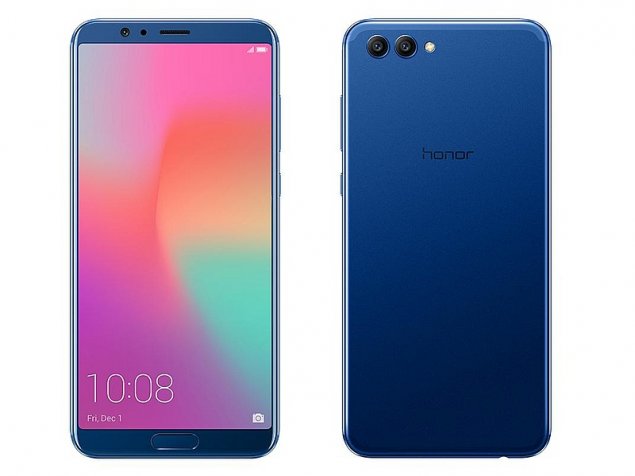 The Huawei subsidiary Honor has today presented the 7X and the View 10, the European variants of the recently launched in China first models of its new line-up.The Honor View 10 is the European version of the V10, which boasts many features of the Huawei’s flagship Mate 10 Pro, but will be cheaper.

The Honor View 10 is equipped with a 5.99-inch LCD screen, which is in 18: 9 format and has a resolution of 2160×1080 pixels. The panel is rounded at the corners and has a rounded in 2.5D design surface made of largely scratch-resistant material. Unlike the Mate 10 Pro and the newly presented Honor 7X, however, there is also a fingerprint reader under the display on the front.
Also Read: Huawei Will Have Its Own Version Of Face ID

Inside is the Huawei’s own Kirin 970 Octa-core SoC from the recently launched Huawei’s flagship Mate 10 Pro. The chip is manufactured on a 10-nanometer scale and has four ARM Cortex-A53 cores running at a maximum of 1.8 GHz, as well as four Cortex-A73 cores operating at up to 2.36 GHz, which are used for demanding tasks. Then there’s the AI unit called the Neural Processing Unit (NPU), which is supposed to help implement intelligent features. The graphics power is at a very high-level thanks to the ARM Mali G72 GPU.

With up to six gigabytes of RAM and a maximum of 128 gigabytes of flash memory, the Honor View 10 also offers a decent set-up in this regard. In Europe, it is offered in the variant with six GB of RAM and 128 GB of memory, while other regions also get a combination of four GB of RAM and 64 GB of flash. The expansion of the memory is possible by means of MicroSD card slot at any time, but you have to do without one of the two nano-SIM slots to accommodate the memory card.

For the cameras, the Honor View 10 stands out slightly from the other current Huawei top models. It combines a 20-resolution and a 16-megapixel resolution sensor, both with a F / 1.8 aperture. The higher-resolution sensor captures images in grayscale only, which are then superimposed with the color information of the 16-MP sensor to combine high contrast and the highest possible image quality with good color reproduction. You do not need an optical image stabilizer here. On the front sits a working with F / 2.0 aperture 13-megapixel camera.

The battery of the device is not quite as big as the Mate 10 with 3750mAh, but thanks to the 10 nanometers SoCs and the FHD + limited resolution still very good running times can be achieved. The overall package is housed in an aluminum housing, which is held in unibody design and rear largely manages without optical exciters. In Europe, the View 10 comes only in blue and black on the market. With just under seven millimeters of height, the device is not very thick despite the rather large battery and moves with 162 grams on the usual level in this size.

The operating system is Android 8.0 “Oreo” in conjunction with Huawei’s newly launched EMUI 8.0, which, in addition to the latest version of Google’s operating system, also comes with a number of improvements – most notably in the area of AI and the camera. The Honor View 10 comes from January in Europe on the market and should then be with six GB of RAM and 128 GB of flash memory. The price will be 499 Euros.