How to manage multiple user accounts on your android device?

Home » Blog » How to manage multiple user accounts on your android device? 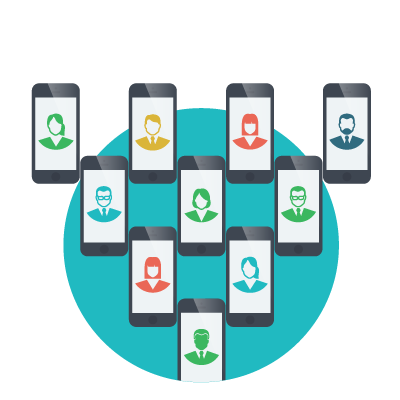 Who wouldn’t love the idea of having multiple user accounts of the same device and up for use with just a few taps? Before these apps, it was not possible for a single user to have multiple Facebook accounts or any other social media under the same user identity not even if the user owned more than one smartphone or SIMs.

If you need to manage more than one user accounts via the same device you would to log in and out every time you wanted to switch between user accounts unless of course you download one of these six applications. Here are the six android apps that has made this phenomenon possible but some of them might require you to root your phone first. 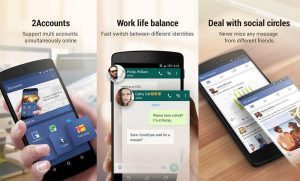 2accounts is specifically designed for users to log in to 2 user accounts on most of the mainstream social media applications like IM, Whatsapp, Facebook, Google Plus, WeChat and also some gaming applications as well. You can switch between accounts without having to sign in an out again and again.

The major benefits of using this application are that it supports 99% of the games that are available for download at the Play store, it creates separate parallel storage for both of the user accounts, provides top notch security for each account and gives instant notification and updates.

Where as there are some cons too like, delayed notification alerts if the application is not currently open or in use, and which also leads to late delivery reports on Whatsapp. 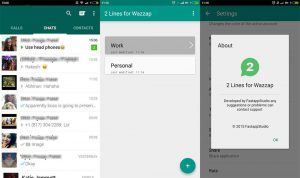 This application, like 2 accounts, also enables users to have more than one account for applications but it does require rooting your device before any usage. It stores application history for each account and let’s you switch between accounts with a single tap of your finger.

The best features of this application include a detailed log of your data and history, the advantage of being able to swap between work and personal profiles, supports dual SIM feature and what better security feature than a pattern lock for each application which this app offers. But despite all these handy advantages, this app annoys you with pop up notifications that sure as hell everyone of this planet absolutely hates. Additionally, the rooting process for the device that is needed for this application might fail and is not supported on many android devices. 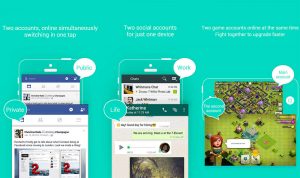 Whether its Whatsapp, Snapchat, Facebook or even Clash of clans, when it comes to having multiple user accounts on the same device, parallel space has got your back. It lets you toggle between accounts just a click away and its by far the fastest application on the list.

Soma major features of this app include not having to root your device, it take uo just 2 MB of your precious phone memory, has massive privacy policies and let’s you run two gaming applications simultaneously.

Inspite of these huge benefits this app has some drawbacks as well, like users cannot stay online on two accounts simultaneously of their social media, has been some reports of causing app crashes, also might cause some massive battery drainage which has however been known to reduce after some time and then there is always compatibility issues. 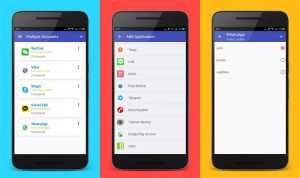 Multi Accounts lets you supports almost all of the media networks including WhatsApp, Facebook, Snapchat, Wechat, Line, Clash of Clans etc, but also let’s you stay connected to both networks without the trouble of having to login and logo out each time. Although dual SIM feature is supported by most apps on this list, but we would specially recommend you this one for it because this app works best for dual SIM devices. Another key feature is the detailed storage of history of each account as well as their data, the simplest toggle feature and also offers you an option for profile selection.

The most common drawback of this app is the trouble with rooting procedure as its compability is not so good with non-rooted devices. 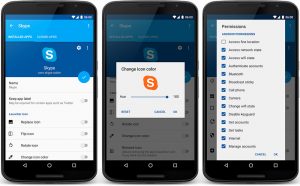 This app features something a bit different, instead of creating two user accounts on a network, this app clones the target application and thus run them simultaneously or parallel to each other which allows you to have not just two but multiple user accounts at once and all the while allowing you the benefit of customizing each app according to your taste. App Cloner allows you the multi login feature on the most popular social apps like Facebook, Skype and twitter etc.

The most beneficial feature of this app include the vast privacy access that allows users to clear caches and disabling auto-start of the application, enhanced password protection option, adding eye pleasing features to each cloned app and also add eye pleasing features to the app like font and color customization which also might vary between several clones of the same app.

Some major cons of this application include it’s lack of support for most popular media apps like Whatsapp, IM messaging, Facebook messenger and Viber. Also the cloned apps are useless when it comes to Google play account because of certification issues. 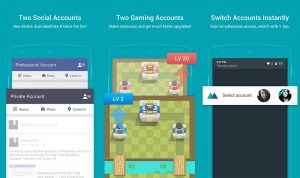 CM AppClone offers separate storage options for all user accounts created that are on the same network which avoids any implicated conflicts. It comes with vast features and one can instantly receive notifications of each app with the most interactive user interface which also include the easiest procedure of creating sub accounts. Moreover, it provides smooth and effortless use of without causing troubles and also the accessibility of switching between accounts from the notification bar. The cons however include its lack of support for some Android devices.

Have you tried any of these apps?? Faced some issues that we have failed to mention? Let us know by leaving a comment.