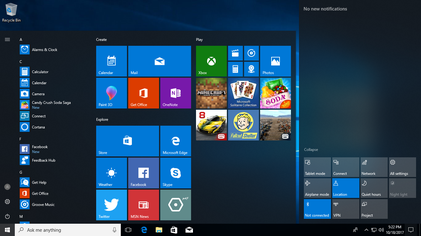 Microsoft has once again produced an unintentional early or false start with an update.According to the latest information, the group had released a new cumulative update for Windows 10 version 1709 aka Fall Creators Update for a short time.

The update was therefore only briefly visible on the Microsoft Update Catalog and the Windows Server Update Services (WSUS) and disappeared as quickly as it had come.According to Günter Born’s report from Born’s IT and Windows blog, the update for Windows 10 Version 1709 aka Case Creators Update appeared under KB9999786 and was suddenly withdrawn.

There are no issues with the update, so Microsoft is unlikely to have the update withdrawn due to bad code. It is much more likely that the update was not yet officially intended for release and the temporary availability was therefore only a mistake. There is also no information about the content.

Microsoft has introduced the new cumulative update in Knowledge Base KB9999786.According to the description, the update was started on November 22nd. At the same time, there was also a cumulative update for version 1703. Already in the morning of November 23, there was no way to access the 1709 update.The link was distributed via Reddit but now leads to nirvana. This does not happen for the first time – in most cases, Microsoft has publicly clarified these errors.

Many users would be very happy about an update for the Creators Update case. There are many issues with the latest Windows 10 release. Among them are more curious bugs, such as the Epson dot matrix printer error. The Epson bug has appeared after the last Patchday across all Windows versions from Windows 7 onwards. Especially in business use, the error is annoying.