Chips That Power And Cool At The Same Time

Home » Blog » Chips That Power And Cool At The Same Time 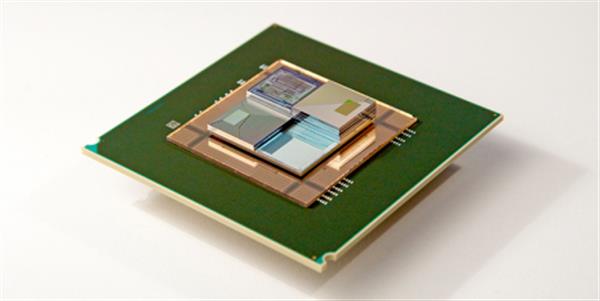 Most devices heat up while generating power. This can be a problem sometimes. Devices like computers have accompanying fans that cool down devices. How cool would it be to have batteries and chips that cool themselves down?

Scientists from IBM and ETH Zurich university have made a small “flow” battery that can supply power to chips and cool them at the same time.  It produces energy to power a chip while and diminishes more heat than it generates. The end result is smaller, more efficient chips and solar cells that store their own energy. It is suitable for devices used for remote monitoring purposes. Redox flow batteries that use liquid electrolytes are used on a larger scale to store energy.  Harvard Researchers created batteries that can last more than ten years with minor degradation, which makes it ideal to store solar or wind energy. It is a diferrent matter to build them on a scale small enough for chips. The team from ETH Zurich and IBM have found two liquids that are suitable as flow battery electrolytes and cooling agents that can diminish heat from chips in the same circuit. They are the first scientists to build such a tiny flow battery to combine energy supply and cooling. They used 3D printing to develop a wedge-shaped micro-channel system that supplies electrolytes to the system using very little pumping power. The electrodes then press liquid in the membrane layer where ions can flow. This generates power. 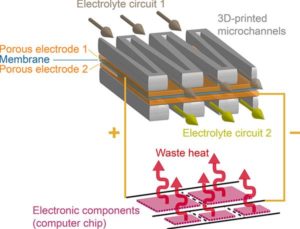 The end result is a system that produces 1.4 watts per square centimeter, with 1 watt left to power the battery after making allowance for pumping. It also gets rid of more heat than it creates, so it powers and cools chips at the same time. The battery needs to produce more electricity than it currently does, so the idea needs to move from research to engineering stages. The team thinks that it has great potential not just for chips, but also lasers that need internal cooling, solar cells that save electricity directly in the battery cell and large flow batteries that are optimized with liquid cooling channels.

What do you think about this invention? Where do you think it can be used? Let us know in the comments below!