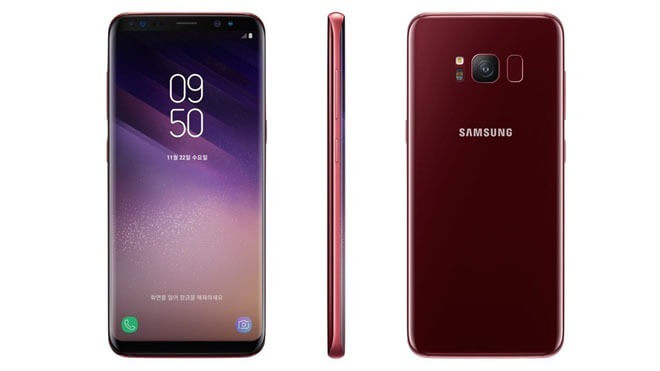 The electronics giant Samsung has today surprisingly presented a new color variant for the flagship model Galaxy S8: The smartphone will soon be available in the color  “Burgundy Red”.

So far, there are only a few new press photos and an announcement for the new Burgundy Red Galaxy S8. The new red model is now available in Samsung’s native South Korea. With the new color, the smartphone will receive an elegant, depending on the light incidence strong dark red-shimmering surface finish. Thus the S8 and its big brother the S8 + is then officially in the seven color variants Midnight Black, Orchid Gray, Coral Blue, Arctic Silver, Maple Gold, Rose Pink and Burgundy Red.
Also Read: Samsung’s Graphene Battery Will Charge A Phone In 12 Minutes!

Currently, there are only Midnight Black, Orchid Grey, Arctic Silver on most markets and only for the S8 Rose Pink. The special colors blue and gold are not available in a lot of places.

For the new Burgundy Red Edition, Samsung is now planning the exclusive launch in its home country of South Korea: The “distinctive edition will be available in Korea from 28 November, before it is launched in selected markets,” the company announced. Which markets will belong to this is not yet known. So whether the red S8 will come to Europe is not yet known.Samsung is in negotiations with mobile operators worldwide.

Samsung’s new strategy to gradually bring out new colors for the Galaxy top model has apparently already proven itself. The customers appreciate the new variants and the greater choice, which has finally triggered the purchase incentive for some customers.