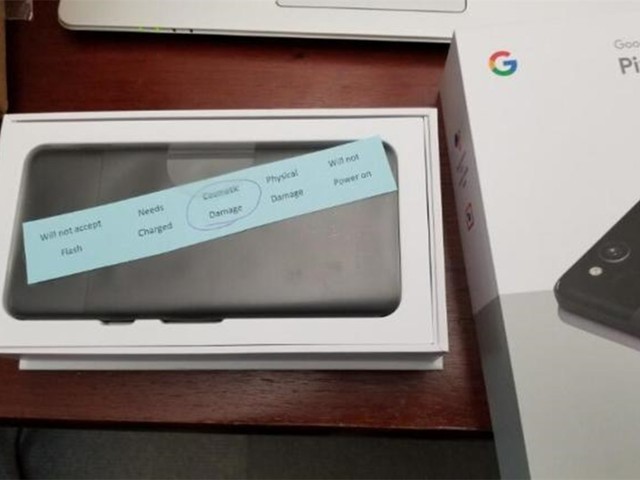 Recently, Google has had a lot of bad luck, and the logistics of the Pixel 2 XL seem to have begun to be problematic. Recently, a user complained to Google that he had just received the new Pixel 2 which had failed quality tests.

The user said he opened the box, surprised to find a  blue note in it. The note also says ‘surface damage’, ‘physical damage’ and ‘can not boot’ and other words. The user checked the phone and found no damages, but still, he wasn’t willing to take any risk.  So he contacted Google. Google team said it had not encountered such a situation, and told the user that he will be given another phone. The phone will arrive next week.

Google’s new flagship machine Pixel 2/2 XL were launched this month.  Pixel 2 XL has a series of problems, such white screen, and burn-in. Google is currently troubleshooting the reasons for the situation. Some analysts have pointed out that if the burn-in issue turns out to be too complicated, Google might stop producing Pixel 2 XL.

Ryan Reith, a mobile device analyst at market research firm IDC, said in an interview that he believes that if the situation is serious, Google is likely to take measures to stop production. However, they are also waiting for the final results of Google’s investigation. Google’s fell by 1.9 percent to $985.54 when the market closed on Monday. Users and reviewers in online support forums also reported they noticed a clicking noise during calls and that the Bluetooth connection is poor between the Pixel 2 and other devices.