Last week Amazon’s and Google’s parent company, Alphabet’s share prices achieved a substantial increase. Just today, Amazon share price once again created history, their share price took the lead in breaking the $ 1,000 mark. This result is not what many people expected, after all, within a year Amazon shares fell to $ 682.

Data company FactSet’s data shows that only 14 other US stock prices are higher than 1,000 US dollars. That only includes one technology stock, that is, online travel company Priceline Group. Therefore, what Amazon has achieved is great. At the end of last month, Amazon released its report for the first quarter of the fiscal year 2017. The data show that its first-quarter net profit is $724 million, compared with $513 million in the same period last year. The profit increased by 41%. Net sales of 35.714 billion US dollars were made, representing an increase of 23% from $ 29.128 billion in the same period last year. The results were above what Wall Street analysts had expected. On the day of the earnings report, Amazon shares rose $ 9.47 in regular trading at Nasdaq, to close at $ 918.38, or 1.04%. In the subsequent after-hours trading, Amazon shares rose again 41.46 US dollars, to 959.84 US dollars, or 4.51%. Over the past 52 weeks, Amazon’s highest price was $ 923.72, the lowest price was of $ 654.00. And in the past year, Amazon shares rose about 51.5%. Previously, Warren Buffett said in his company’s earnings meeting, that not investing in Google and Amazon was a huge mistake, he is also quite regretful of this. Buffett said that 12 years ago, soon after Google had just listed on the market, he missed the opportunity to invest in Google. In addition to Google, Buffett is also very upset about not investing in Amazon when it was a start-up. Buffett said he underestimated the founder of Amazon’s, CEO Jeff Bezos (Jeff Bezos) talent, he did not think that Bezos would be this successful. Amazon’s share price has doubled in less than 2 years. This $1000 price will have no significant effect on the day to day running of Amazon, but it will boost its cachet and rescue it from stock market volatility. 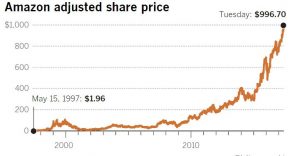 Also Read: Amazon’s Founder Is About To Be The World’s Richest Man

Because of high prices, shares of Amazon and Google are attracting extra attention and scrutiny. Some think the prices will flatten soon and that all the growth concentrated on some companies can be bad for smaller businesses and startups. Amazon’s shares might be unaffordable for mom-and-pop traders who buy individual stocks. When the Internet sector boomed in the 1990s, a lot of companies (Amazon included) split their stock so that a single share will have a lower price and at the same time allowed shareholders to keep the same ownership percentage. Mutual funds do not care about the price as they think Amazon is fairly valued. High prices reflect the fact that you are getting something premium. Amazon’s founder and Chief Executive Jeff Bezos has said to the shareholders that he is not thinking about a split. Shares prices Facebook, Amazon, Netflix and Google (via Alphabet), which are all powerful internet companies called FANG, have risen by 30% this year.This is very impressive compared to the 9% growth of Standard & Poor’s 500 market index.

The amount invested in tech firms is increasing rapidly every year. Facebook and Alphabet are attractive for investors as they have snatched advertising deals from conventional media like tv channels and newspapers. Netflix is getting many international subscribers. Apple’s sales are also going strong. But Amazon is the favorite because of its potential for growth. It wasn’t always like this for Amazon. Amazon’s shares stayed below $100 in the 2000s. Shares increased in the last 8 years when investors started appreciating Bezos’ vision. The increasing use of smartphones made online shopping easier. It increased demand for Amazon’s services. Apart from that, the demand for warehousing, technology services, and advertising also increased. Amazon’s $724 million quarterly profit is nothing compared to its $35.7 billion sales. Investors are buying dividend-less shares as Amazon is expanding rapidly. Amazon has also destroyed many big retailers, like Macy’s, Radio Shack and Borders. Amazon has also achieved 10 percent market share domestically. There were 19 straight quarters of 20 percent retail revenue growth from Amazon so its growth is very consistent. Apart from Amazon’s retail business, 10% of its sales come from companies that lease online storage and computing technology. It’s web services are also growing at the rate of 40% with vast profit margins. If you had invested $100 in Amazon on its first day of trading in 1997, its value would have been $50,000 today. At the price of $1000 per share, the market capitalization is around $478 billion. This ranks fourth in Amerca, after Apple, Alphabet, and Microsoft. This value is also twice the market capitalization of the biggest conventional retailer in the world, Wal-Mart. It is also 15 times more than Target’s size. Bezos own 17% of Amazon’s outstanding share, which means his stake is $80 billion. Some other companies that trade above $1000 are Priceline Group Inc, (online travel booking company), NVR Inc. (home builder), and Berkshire Hathaway Inc. (Warren Buffet’s company). Because Amazon has more shares in the market, it is 4 times the size of NVR, Seaboard, and Priceline combined. It is also 17 percent bigger than Berkshire Hathaway, which is a multinational conglomerate. If Apple had not pulled a 7-for-1 split 3 years back, it could have beaten Amazon to this $1,000 mark.

Also Read: Amazon Bookstore opens up in the heart of New York City

It is a good idea to invest in Amazon’s shares now before Amazon share price reaches $2000 in 2019.