Animal Farm is an exquisite metaphor written by Eric Arthur Blair (George Orwell), which depicts the stark realities of totalitarian and despotic political systems. This “Fairy Story” makes it intelligible, that revolution can oust a master, but the fate of public will again be a puppet of the despots. Utopia is not a product of revolution only, it requires more than that.

The story begins with a night, when minds were radicalized, ideology was defined and dreams were fabricated. The old boar of the farm (Major) congregated the animals to point them out the prime reasons for his hatred for human beings. He swayed them that how these two legs creatures hound them in every possible way. How man never endeavors for his bread and butter and always relishes the hard work of these four legs creature. From milk to eggs, all the stuff is being used by humans for their own interest.

The fate of Major didn’t allow him to see the day of Rebellion, as he passed away after few days. But future of Mr. Jones (owner of the farm) was distorted that night. The ideology of Animalism had decided to oust the custodian of Manor Farm.

Major gave them the dogma, while Jones gave them reasons. From hens to horse, from sheep to ducklings, all the animals grappled to kick Jones out from his own property. The two clever pigs, Napoleon and Snow ball clasped the leadership of the farm to thrive the first animal owned territory.

Ideology had been setup, farm had been claimed and finally leaders had been chosen!

Every animal was speculating a robust future, when there would be no whips, no master and every animal would be equal. But, this all was idealism, and their optimism littered their own ideology.

From” Battle of Cow Shed” to “Battle of windmill”, each scene depicts the grim picture of current political systems of countless territories. The polarity between the leaders, execution of their fellows and dealing with their enemies was enough to frail the sanctity of Animalism. The growling dogs around Napoleon personified the political despotism with utter delicacy. The clever persuasive speaker, Squealer, a small fat pig, deceived the biggest beast with his eloquence. Their zeal was  abused, dreams were shattered, while destiny was darkened.

Being a socialist, George Orwell unveiled the political irony of this moderate world. He exquisitely unfolded the political and social realities of tyranny and despotism. How elite is being served and population is being bothered! 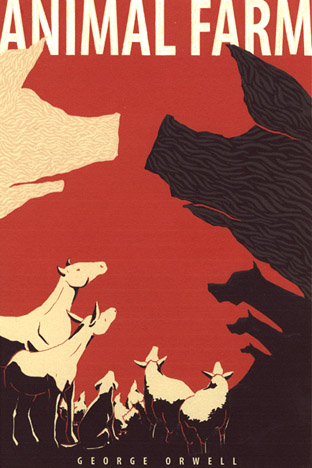