Apple Is Apparently Mad At Uber

Uber seems to be in headlines all the time. For the wrong reasons, unfortunately. Apparently, Apple has threatened Uber that it will remove the Uber application from its store. Ouch. 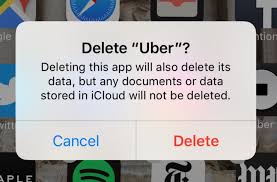 Apple obviously takes the privacy of the iPhone users very seriously. Apple has in the past resisted FBI demands for a backdoor to the iPhones of terrorists. So it should come as no surprise that Uber CEO Travis Kalanick is a bit concerned about what Apple’s CEO Tim Cook might do. Kalanick had been instructing his engineers to hide a feature in the Uber app that let Uber secretly identify and tag users of iPhones, even after they have deleted the from their phone, according to a report by The New York Times. Apple soon detected that something was amiss. Cook apparently told Kalanick that his company is breaking some of their rules. Cook then said Uber should either stop these practices or get ready to be removed from the Apple app store. Going off Apple app store would have meant losing millions of iPhone users so Kalanick complied with Apple’s demands. Uber has denied using its application for tracking individual riders’ locations and said that feature was only used for fraud detection. Uber said it does not track the users or their locations if they have deleted the Uber app. Uber said that it is just a way to stop fraudsters from downloading Uber onto a stolen phone, inputting a stolen credit card, hailing an expensive ride and then wiping the phone multiple times. They said they use similar methods for detecting and preventing suspicious logins for the protection of user accounts. They said that recognizing fraudulent users is important for the safety of Uber and its users. Uber has been accused of using software for illegal purposes before as well. Uber was recently said to be using a secretive tool known as Greyball to prevent local authorities from catching the drivers violating local regulations. Uber has since then stopped using the tool. In 2014, an Uber executive reportedly used an internal feature to track a reporter’s location without her consent or knowledge. The use of this tool by Uber, that lets employees see logs of Uber customer activity, disregards the privacy of users. The resulting condemnation made Uber hire a third party expert of data privacy to review its policies and give recommendations. We do not know yet what the 2015 meeting between Tim and Cook was about. Apple hasn’t commented on the story yet.

Uber has been acting strangely lately. It has been making headlines for all the wrong reasons. Let’s see how many wrong moves will convince Uber to get its act together.

What do you think about this Uber Apple news? Can Apple really pull of Uber from the app store?