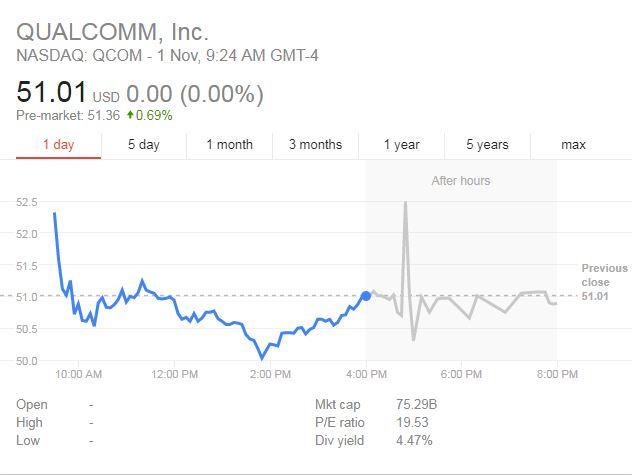 Apple and Qualcomm are currently settling patent disputes in court. The two sides have become arch enemies. As per news, iPhone might abandon Qualcomm’s baseband chip next year. As a result, Qualcomm’s shares fell.

Qualcomm shares fell 6.7% on Tuesday after Apple’s plans to abandon Qualcomm chips next year. Intel’s share price rose 2.5% compared to Tuesday’s close. On Monday, there were reports that Apple’s iPhone and iPad for next year will no longer use Qualcomm modem chips, but switch to Intel or MediaTek chip.

Qualcomm invested a lot in mobile technology before its rivals such as Intel, and that’s why its semiconductors are used by many high-end smartphones. But, some companies seek multiple suppliers too.

Qualcomm has not made any comments regarding the report but said that the modem chip, which is expected to be used for the next generation of iPhone, has been fully tested and provided to Apple, and the company is committed to supporting Apple’s new devices, just like other companies that support the industry. Apple has not made any comments regarding this news so far.