You might have received the viral SMS and WhatsApp forwarded message that warn you to take care of your kids from the harmful effects of the online game called the Blue whale challenge, that urge them to commit suicide in the end. Well do not take it light, there is truth behind it.

The game that has origins in Russia is called Blue Whale or the blue whale challenge. While blue whales are beautiful creatures, the game is horrific and would prepare you for the ultimate challenge of taking your life. The game has a series of set challenges that are spread over the span of 50 days. A curator will assign you tasks and you would do them and post your pictures on the internet doing those tasks. It will start off with easy challenges, like wake up at an odd hour and watch a scary movie. Listen to some music that the game curator will send you and other stuff like that. Then the tasks become crazier like put a cut on your skin, carve a number on your arm or thighs. It will also urge you to do difficult and daring stuff like try to climb a crane or stand on the edge of a tall building with legs dangling down. And ultimately it gives you the mega challenge and that is to embrace death. 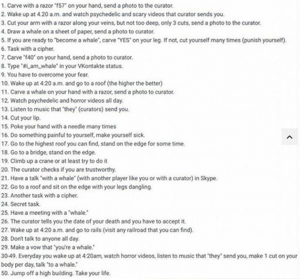 read more Thanks to Hackers, Windows 10 price might be reduced

It has been estimated that over 130 suicides might be result of this game. People, especially teens will start using this game, just for fun, thinking they would not commit suicide but are brainwashed through the music and audios that are sent to them by the curator. Slowly they accept more and more daring challenges and might end up taking their life.

There has been two arrests made by the Russian police, where suspects are believed to be associated with the game creation. The curators use the social media groups to manipulate the teens and tween into ending their like. Kids as young as thirteen years of age are known to fall victim to this game.

Among the deaths related to this game, there is the tragic incident where 15 year old school girl, Yulia Konstantinova, posted the picture of a blue whale on her Instagram page, before jumping off from a tall building.

These horrific incidents, once again prove that parents need to be especially careful about what their kids are watching and doing on the internet and the social media. Try to create a friendly environment in your homes, where kids can openly talk to you on any subject.

Spread the word about this horrendous and villainous blue whale challenge game by sharing the article.