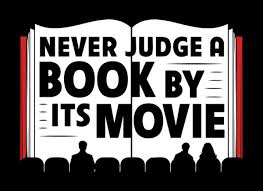 Books are better. When it comes to the genre of the Adaptation film, nine of ten times this is true. We all say it, because the book as a medium seems to tell the story better than the film. We all say it, and perhaps we don’t need to be reminded of this fact every time we walk out of a movie theatre. It seems like all we do nowadays during the post-movie, glossy-eyed, leisurely paced walk away from the theatre is talk about how the movie had its “quirks” and was tolerable in some ways, but refuting the rest with the singular statement “the book was definitely better”.

It seems as if Hollywood is capitalizing on the already made audiences (or fandoms as we like to call them) of major literary works because this is what all industries chase after: an easier, more profitable, more efficient money-making process. And it’s been successful, still going strong even today, if The Harry Potter and Twilight franchises are any indication. But the troubling part here is their commercial successes is what made their genres, that of the adaptation. Are art producers really compromising the art element of the movie in favour of the financial success? Because it seems to me that popular fiction is screened more often than not, and this is because of its fame ergo financial value rather than its intrinsic artistic value. Or perhaps this industry is so money-oriented that the producers, the big ones, who thrive, are those too blind to actually see art for art’s sake. There isn’t much room for art in this industry. It’s strictly business.

Because how else could you keep on doing adaptations instead of searching for new scripts, has this generation really sunk that we can’t produce great screenwriters that we have to go for low art in badly adapted plot stories of books that aren’t that good anyway, instead of searching for the next Juno? Vampire Academy was a commercial disaster; as was Mortal Instruments, because perhaps we’ve reached a point where audiences are not going to enjoy badly made movies derived out of badly made books. The trouble also is that since they’re trying to translate one medium into another, and leaving a lot in the middle, because something is going to be lost in translation, they’re not, as they should be, concentrating on the one medium and how to perfect it, the medium being film. Some books make great movies because are in essence cinematic, some plot lines are fantastic and work for film. Some books aren’t descriptive or don’t have that big of a hook and are essentially just better-suited to the medium of a hard-covered book, giving a reader the experience that can’t be translated or recreated into the experience of the film. And as we all know, 760 pages can’t be squeezed into 150 minutes of running time.

It’s sad to see that finance seems to be the largest incentive in making art. Why else would Chetan Bhagat’s cute but amateurish novel make it to the big screen when there are plenty of fantastic writers like Narayan and Amit Chaudury to choose from in India? Why else would there be low art that is rampant and high art that is squeezed into the corner? Because the argument is that low art is more accessible and understandable, but a) does that mean it can be as bad as it wants? And b) High art is also understandable because on some deep fundamental level we can all relate to the themes it works through. Consider literature’s universality, does the canon not include writers that speak to masses through one singular subjective lens and yet extend their horizons within the space of that one story they’re telling.  That’s the way with film. The Adaptation is never perfect; it’s in a half-way hedge between book and film, never crossing into either territory in its entirety. And it’s not the only film genre known to man either, if considered, other genres with great scripts can thrive just as well, scripts that are stories made for cinema and nothing that aren’t books that have been de-spined de-robed, deboned and stripped of structure only to be made into something that looks like a grotesque papier-mâché skeleton with most of its ribs and legs missing.