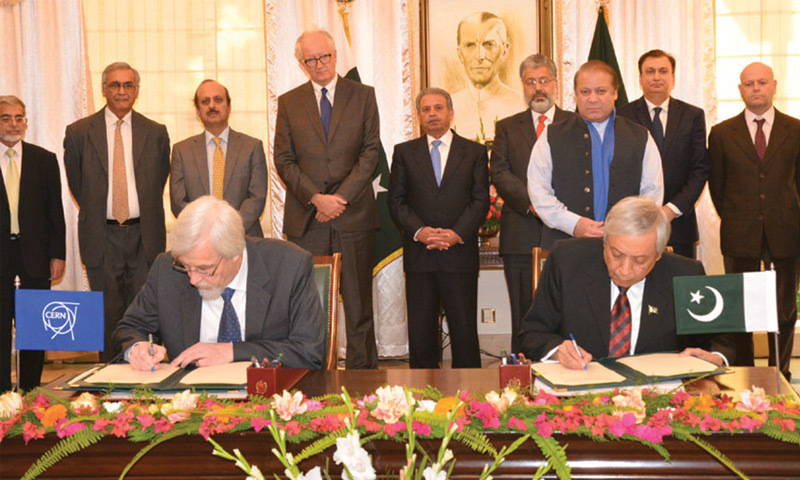 CERN is a European Organization,for advanced Nuclear Research. This organization is the world’s leading scientific body conducting research to answer  fundamental questions related to universe, basic structure of matter and how various forms of matter interact.Much of the research is carried on these days at CERN’s Large Hadron Collider.This organization was formed nearly 6 decades ago , on 24th  September,1954. It currently conducts it’s research in four main labs, all located in LHC. The LHC is up to date the largest particle collider in the world, though there have been reports, that China plans to build a particle accelerator that would dwarf the LHC.  The labs at LHC are working round the clock to understand the very sub atomic particles found on this planet and else where in the universe. Hence an attempt to further understand how everything came into being from physics pov. The 4 Labs in LHC are following:

Pakistan’s collaboration with European agency, began in November, 1994. Since then scientists, engineers and technical staff, participated in numerous CERN research programs and experiments. Two GRIDs in Pakistan receive direct data from CERN’s LHC and various research programs and computations are done on them. Aside from these Pakistan also aided in construction of LHC, by providing various components. Last year an agreement was signed on December 19, 2014, between PAEC & CERN that intends to take co operation between the two organizations to a whole new level and increasing reach of Pakistan’s industry.

CERN membership,how can Pakistan benefit from this ?

This agreement is of high significance as it will allow the technical man power and scientific community to further enhance their skills and to be update with latest developments in field of Nuclear Physics. Further more this agreement with CERN increases chances of career development and training programs. The benefits from this deal are immense, learned and skilled scientist can greatly help in developing and setting a new trend in Pakistan e.g, a focus on Research in higher studies and hence pave a way for better tomorrow of this country.  Such a trend is desperately required to instill a passion in the people for education and pave ways for thriving of research programs to be started in higher education institutes. Moreover this will also boost Pakistan’s industry and in turn will give the economy a boost. May this collaboration bear fruit.