So far robotics was being quite extensively used for industrial purposes for a wide array of purposes.Although artificial robotic limbs, hands are being developed and research is being done to improve them much more. But Japan’s Cyberdyne has been accredited for developing the HAL (Hybrid Assistive Limb) exo-skeletal suit for patients with limited mobility.

This great feat is the brain child of Cyberdyne’s CEO Yoshiuki Sankai. Sankai is a robotics engineer and has a doctorate in engineering from university of Tsukuba, Japan.

Apart from being a professor at two different universities. Mr Sankai is also a Japanese billionaire. Under the guidance of Mr Sankai the university of Tsukuba and Cyberdyne collaborated to research and develop HAL. It’s remarkable to note that it’s the childhood dream of Mr Sankai to use technology to help people and improve society.

The industry to develop this innovative exoskeleton suit was almost built from scratch. Now with the prototypes already in successful phase of helping elderly people. A commercial launch is being prepped for the suit.

The working of HAL is simple the suit has been fitted with small motors that help a person inmovement. This it simply does by reading brain signals to the respective part we want to moveand than correspondingly directs the respective motor to assist in movement.The functionality of our muscles is coordinated bybrain through electrical signals transmitted via our nerves. With aging or some injury this system is rendered useless, our muscles don’t receive enough signals from brain, the HAL suit  detects even the faintest signals and after analyzing them it than helps the person to move. 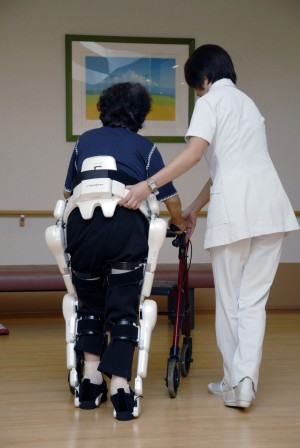 The research for HAL suit began as early as 1990, by 1997 Sankai built the first prototype. In 2000 the company Cyberdyne was formed for promoting and marketing of the suit. 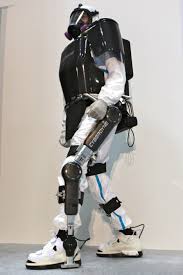 The initial prototype was so bulky it made even the slightest movement impossible, and the battery back along with the mini computer were a burden for the user.The total weight was around 22 kg, Now nearly a decade after the suits weights only 10 kg. Hence it can be used easily. By end of 2012 Cyberdyne was awarded  ISO 13458 by Underwriters laboratories, proclaiming the sounds of HAL.In the start of 2013 HAL received a global safety certification. By mid of the same year HAL suit got a EC certificate granting Cyberdyne access to the vast opportunities for medical treatments in Europe.

The HAL suit has two methods of controlling the movement. One method is Cybernetic Voluntary Control (CVC)  and the other one is known as Cybernic Autonomous Control, for automatic motion support.

Cyberdyne also manufactured specially designed suits for rescue workers of Fukushima reactor disaster.Around the ending of 2014 Cyberdyne rolled out a version of HAL to be used for construction purposes. There’s also a legs only version of HAL. More versions are being prepared for a wide variety of applications.