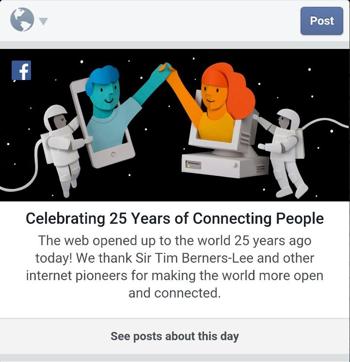 So what does the greeting card that Facebook sent to all of its users mean? Actually Tuesday is not the actual anniversary of Facebook but there is a much deeper history about it. On this date, exactly 25 years ago, the “internet” was created and Facebook along with its founder Mark Zuckerberg was nominated as one of the “.com 25” which means that its considered as one of those revolutionary companies that are given huge credit for shaping the internet as we know it today.

Furthermore added to the list of top 75 nominees are Larry Page  and Sergey Brin- the co-founders of Google, Apple co-founder Steve Jobs and Microsoft co-founder Bill Gates. Also the “.com-25” will be receiving honor at May 26 at a gala in San Francisco.

On this day, research organization CERN where the creator of WWW (World Wide Web) Tim Berners-Lee worked. The term “internaut” means a person who acquires vast knowledge about how to make use of internet and its history. But what exactly is the history in WWW that we keep talking about? As we mentioned Tim Berners-Lee was a scientist and he made a proposal of creating a distributed information system for the laboratory he worked at and which was in March 1989.

In December 1990 the first World Wide Web server went live on CERN and it was made with the intention of providing working scientists a mutual platform for sharing information globally. The code was released for public use on April 1993.

If we get to technicality, today is not actually the 25th anniversary of World Wide Web, but it’s the day Tim Berners-Lee the employed scientist at the European Organization for Nuclear Research (CERN) released the first ever World Wide Web platform and also it was dated in 1990 so it’s safe to say that it’s been more than 25 years since that happened, while the actual date is still in question.

3.17 billion users have been recorded who use the internet and this was only the last count of 2015, which is around 40% of the world’s total 7.4 billion population, and half of those users are using Facebook and not just that, there are reportedly 3 million emails sent every second and we have tim Berners-Lee to thank for it.