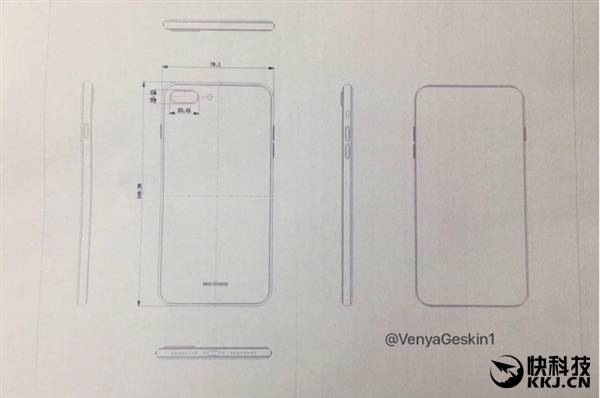 iPhone 8 has been the most eagerly awaited mobile phone if the year. Apple is expected to release its flagship phone some time later this year. People are saying October release but it might end up being the Christmas release too because at that time of the year the prospects of sales are much higher. However Samsung has already released its S8 phone thus creating a high level of competition for the upcoming flagship release by Apple.

Both the design leaks show that there is a dual camera at the back. In the case of iPhone 7 S, the dual camera is horizontal but in iPhone 8 it is a cool vertical design. There is no finger print scanner at the back in this design. However the front although not very clear is bezel free and there is the end to end display.

Here is a closer look at the designs. It seems the mobile phone sets would be sleek and thin and hopefully light weight.

Now with the design specs leaks let us hope there is the phone release data coming soon. At least iPhone 7s needs to be released around October.

Along with the leaks there has been news regarding the beginning of mass production of both these mobile phone. Let us see when they hit the stores.

Are you excited about the release of iPhone 8 and iPhone 7s after the final iPhone 8 design leaks? if not then you are a fan of which mobile phone? Let us know by commenting below.