The Founder Of Amazon Is Now Nearly As Wealthy As Bill Gates!

Home » Blog » The Founder Of Amazon Is Now Nearly As Wealthy As Bill Gates!

According to reports, although the Amazon stock prices fell last month, they have picked up again. The current prices have hit an all time high. This is good new for Amazon founder Jeff Bezos. He is now nearly as wealthy as Bill Gates.

Amazon Founder Bezos Is Getting Wealthier By The Day 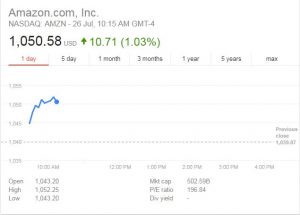 It is reported that in June this year, Amazon announced to spend 13.7 billion on the acquisition of fresh grocery retailer Whole Foods Market (hereinafter referred to as “total food”). This is the biggest acquisition in the history of Amazon. Amazon founder Jeff Bezos said in a statement that there are millions of people who like the whole food supermarket because it provides the best natural organic food so that people can eat more healthy. In the middle of this month, Amazon hosted the 3rd Prime Membership Festival, where Amazon created the highest sales day in the company’s history. In the thirty hours, Amazon’s sales grew 60% year-on-year.

At present, the Amazon official has not opened the Prime Membership to create the specific turnover, but you can take the results of double 11 contrast. On November 11 last year, through sales activities, Alibaba created 18 billion US dollars in sales, of which 7 billion US dollars was generated in the first two hours.

Amazon has shown tremendous growth. Jeff Bezos has turned out to be one successful man. If this rate of growth continues, he will soon be a lot wealthier than Bill Gates.