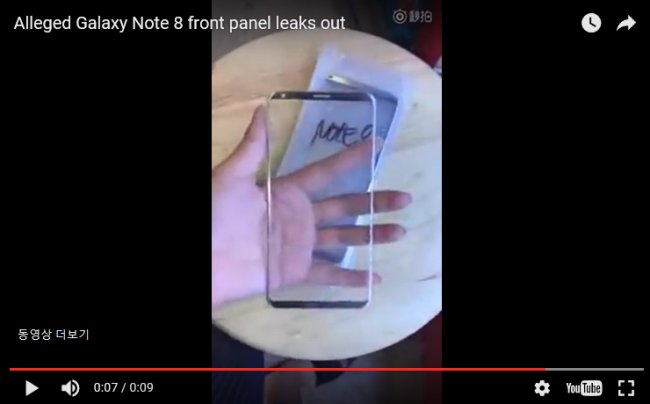 The much awaited Samsung Galaxy Note 8 smartphone that might be launched in late summer will apparently have a 6.3-inch bezel-less screen, just like the Galaxy S8 model, according to a video leak.

In a nine-second video that was posted on China’s Weibo, the front panel of Samsung’s next smartphone was revealed. It raised assumptions that the phone might follow in the footsteps of Infinity Display which has reduces the area of bezel width. Samsung Galaxy Note 8 will apparently be 0.6 inch larger than Galaxy Note 7. Galaxy Note 7 was recalled on battery issues last year. It will be 0.1 inch bigger than Galaxy S8 Plus too. Some design and specification of the upcoming Samsung Galaxy Note 8 have already been leaked. Phone Arena also leaked some news last weak with a picture of a dummy unit. Phone Arena specializes in smartphones. The leaked videos of Samsung Galaxy Note 8 look massive and confirm the previous reports that Note * will have a 6.3 inch display which is pretty large. Apart from the Infinity Display, the Note 8 might also feature a dual-lens camera which will be a first for Samsung. According to some reports, Samsung had tried to feature the dual-lens camera in the latest Galaxy S8 series, but the plan was abandoned because of high costs and design issues. LG’s latest G6 smartphones and Apple’s iPhone 7 both have a dual-lens camera which improves the camera experience. The dual-lens camera on Note 8 will probably have a 12 million-pixel wide-angle camera along with a 13 million-telephoto lens. The Note 8 phone is likely to maintain the 18.5 to 9 ratio. It will apparently have a Super AMOLED display along with 4K resolution (3,840 x 2,160 pixels). Samsung has not made any comments regarding these rumours. Samsung is also planning to introduce a renovated version of Galaxy Note 7 before the launch of Note 8. Samsung recently got green light from the US Federal Communications Commission for safety certification for the new version.

Will you be interested in buying the refurbished Note 7? tell us in the comments section below!