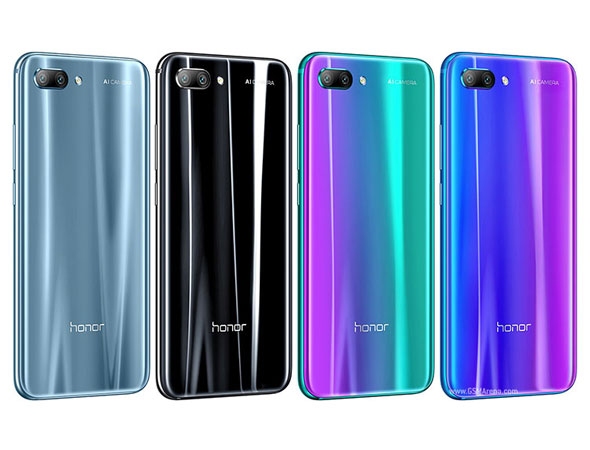 Huawei’s sub-brand Honor is continuing its policy of aggressive prices to compete with brands like Xiaomi and capture more market share. After the last two convincing generations, Honor has surprised us again with its later phone the Honor 10. The phone has high-end specs but it is affordable which means it’s a win-win situation for everyone! The phone is similar to Huawei P20 in a lot of ways. Fron instance, its technical specifications, compact size, and elegant design is just like Huawei P20’s. Similarly, Honor 10 also has an ultrasonic front fingerprint scanner and a notch. Basically, Honor 10 is as good as it gets in this price range! So, should you get the phone? Let’s find out in our Honor 10 review! 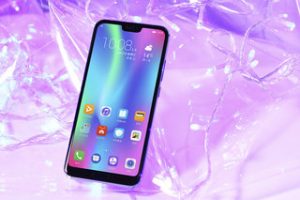 The phone comes with a Super Charge” power supply with an output of 5V-4,5A. It can fully charge the phone in nearly 1 hour and 40 minutes. In the box, you also get a USB cable – Type C for data exchange and charging. It is of a good quality.

The Honor 10 is fueled by Huawei’s own HiSilicon Kirin 970 SoC, a 10 nm octa core with NPU. It is the same chipset that powers the Huawei P20 and Huawei P20 Pro. The SoC is accompanied by the Mali G72 MP12 GPU. The phone has 4 GB of LPDDR4 RAM. There are two internal memory variants: 64 GB and 128 GB type UFS 2.1. Unfortunately, the internal memory is not expandable. The sensors include a gyroscope, an accelerometer, and magnetometer. Apart from that, the brightness and proximity sensors are also present. The phone also has an IR port. 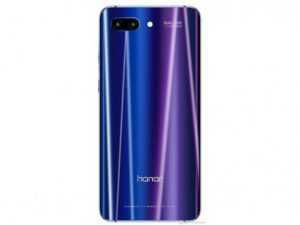 At the bottom of the front of the phone, you will find the ultrasonic fingerprint scanner. It is accurate, fast, functional, and responsive. It also fits well on the front and compliments the linear and clean front design. However, users should exercise caution while configuring the fingerprint sensor, otherwise, they may find it fallacious and slow. However, most of the times there are no issues. Most of the times, you will not have to reposition your finger the second time for a reading. However, the impression release system is integrated with the face recognition system. But, it is fast and responsive even when the ambient light is low. For connectivity, there is the Type-C port with OTG, WiFi ac, LTE of cat. 18, NFC and GPS, and Bluetooth 4.2. Unfortunately, there is no FM radio.

Honor 10 has a great hardware too. Huawei has put the best SoC it has right now in it. However, despite all this, Honor 10 is no match for the Huawei P20 and Huawei P20 Pro when it comes to reactivity, promptness, and responsiveness when it comes to the execution of commands. However, this difference in performance could be attributed to the software. So, hopefully, a software update will fix the issue and allow the phone to harness the power of the powerful processor. That is not to say that Honor 10’s performance is not satisfactory right now. The phone performs well but with the Kirin 970 SoC, we expect it to match the performances of the Huawei P20 and Huawei P20 Pro.

The telephone department of Honor 10 is also reliable. The phone performs well in most situations. It is a dual sim smartphone with 4G connectivity available on both slots. However, it is not fully active, so you can only use one of the sims at a time that will have access to signal during a phone call. 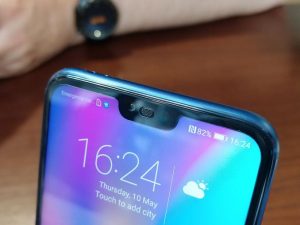 Honor 10 is aesthetically pleasing and has been made with quality materials. Measuring 149.6 x 71.2 x 7.7 mm, the phone is compact. At 153 grams it is also lightweight. The front and back of the phone have a glass design while the frames are made of aluminum. At the bottom of the front of the phone, the home button peeps out a little. It is hardly visible and exists to indicate the presence of the fingerprint scanner. At the top, there is a small notch that contains a microscopic notification led, the earphone capsule, and proximity and brightness sensors. The phone is available in three colors: black, Phantom Blue, and Phantom Green. The Phantom variants are made with a 15-layer glass back body and the color changes depending on where the light hits it from. Even though the refined and elegant design makes the Honor 10 look sleek, the phone is really slippy. Perhaps that is the reason why you find a protective cover in the package.

The display of the phone is 5.84 inches with an aspect ratio of 19: 9. It is FullHD and has a resolution of 2280 x 1080 pixels. It is a decent LTPS LCD un and has a good color calibration, bright colors, and a great brightness level. The readability levels outdoors are not the same as those of Huawei P20 but the deep blacks and high viewing angles still deserve praise.

The audio in the capsule is clear and has a high volume. You can also listen to audio with wired headphones by connecting them to the audio jack. On the bottom edge, there is a mono speaker with good sound power and quality. So, the audio and multimedia sector is good when compared to competitors. However, a software update can greatly enhance the experience.

Honor 10 has a dual camera system on the back. One is a 16 MP F / 1.8 RGB and the other is 24 MP F / 1.8. Both the cameras have non-stabilized lenses. The front camera is 24 MP and has an aperture of F / 2.0. The thing that sets the Honor 10 camera apart from that of its competitors is the utilization of AI. It enhances the capabilities of the camera. The phone can recognize many scenes when the simple photo interface is enabled. It can recognize up to 19 scenes. Based on the scene, the phone will change the performance of the pictures based on the portrait subject. For instance, the colors of the sky or the greens of nature will be emphasized or more contrast will be added to the city views. The phone is able to correctly recognize the scenes but in some rare cases, the software exaggerates the images with filters which reduces the credibility of the phone. However, this is not really an issue as you can disable the AI.

Individual or group portraits can also be created with blurred background and clipping of the subject. Honor 10 has made a great leap in this department and the phone almost always correctly recognizes the subjects. However, the bokeh effect is not that as credible as it would have been while shooting with an aperture open. However, the quality of the images is great, especially during the daytime when they come out really detailed. However, as the light dims, the pictures start to lose the saturation and noise becomes visible. That doesn’t mean that the image quality isn’t good in the evening. It is still in line with most mid-high end smartphones in the market, even if it is not comparable to the top of the range, including Huawei P20 and P20 Pro. The P20 flagships can count on the effectiveness of stabilization with AI, something that is missing on the Honor 10. There is a lack of incisiveness in the selfies but this can be resolved by activating one of the many options for portraits. The image quality is above average. You can make videos with FullHD resolution at 30 fps using the Honor 10. However, if you go above that you will experience unnatural colors, lack of stabilization, and flat audio. 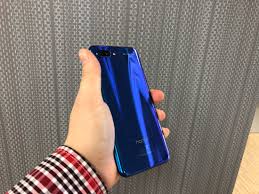 Honor 10 comes with a 3400 mAh battery which means the phone will easily last you an entire day with an active screen time of 4.5 hours. Sometimes there is a little overheating which also results in the drainage of the battery. Overall, the autonomy of the phone is sufficient.

Honor 10 runs Android 8.1 Oreo with EMUI 8.1 on top of it. Huawei has fully customized the phone and there are no compromises, There is a safe, private space, and multi-user mode, and many other options for controlling gesture, movement, and management of privacy and security.

If you do not like the notch, you can hide it by making the entire status bar black and the display portion on the two sides of the notch. When you activate this option a perfect symmetry is created between the lower and upper frame of the screen. The phone can also be unlocked with face recognition.

The price of Honor 10 starts at 399 euros in the for the 4GB RAM and 64GB internal storage version, and 449 euros for the version with 128 GB of internal memory. The price quality ratio is excellent. The phone is comparable to high-end phones from Huawei. It is a refined and a concrete alternative for people who want an affordable smartphone with high-end specifications.

Overall, it is a good phone with little smudges such as lack of waterproofness, haptic feedback, and the lack of a microSD slot. Honor must be lauded for such a great, affordable phone.

What do you think about the Honor 10? Share your views with us in the comments below!