Intel Sides With Apple In The Ongoing Battle With Qualcomm 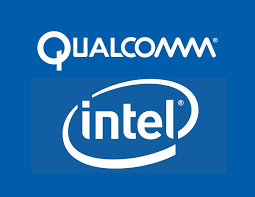 Apple and Qualcomm patent dispute is getting more intense. Till now, most manufacturers were dissatisfied with Qualcomm’s patent licensing model and even the technology community demonstrated collective support for Apple. Now, the chip giant Intel is also the criticizing Qualcomm and has sided with Apple.

Previously, Qualcomm had filed an application to the US government, complaining regarding the use of Intel baseband processor in iPhone. This was not only a direct damage to the interests of Apple, it was also detrimental for Intel. Intel’s has accused Qualcomm of “patent-free, non-patented” hegemonic practices. Intel said Qualcomm’s practices will undermine the level of fair competition as it requires mobile phone manufacturers to pay expensive licensing fees regardless of whether they use Qualcomm baseband, and if they buy Qualcomm chips, royalties reduce.

Qualcomm believes that its own cellular connection technology created a smart phone, without it without the popularity of the latter would suffer. Qualcomm collects lots of royalty this way. This money has become one of Qualcomm’s most important source of income. Prior to this, Apple iPhone has been only using Qualcomm baseband chip, but since last year, Apple has also started getting supplies from Intel to balance Qualcomm’s monopoly position. Intel’s baseband ratio accounted for about three percent, and it is expected to increase this year. Since Qualcomm’s monopoly is under threat, it is definitely worried.

Intel has filed a public statement with a US regulatory agency which accuses Intel of making an “interlocking web of abusive practices.” Intel further said that Qualcomm’s request to ban the imports of iPhones which use non-Qualcomm baseband processors from US “is a transparent effort to stave off lawful competition from Qualcomm’s only remaining rival.” It also said that: “This twisted use of the Commission’s process is just the latest in a long line of anticompetitive strategies that Qualcomm has used to quash incipient and potential competitors and avoid competition on the merits. And although those strategies have sometimes been subtle or complex, Qualcomm’s latest complaint could not be more blatant in its anticompetitive aims.”

Seems like Qualcomm has made a lot of rivalries in the industry. Even Samsung is focusing on its own chips to break free from Qualcomm. Let’s not forget that iPhone 8 might be a bit slower because of Apple’s on going feud with Apple.