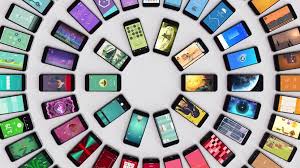 Strategy Analytics today announced the earnings and profitability of major mobile phone makers in the first quarter of 2017, and Apple is still “profiteering” with an operating profit of $ 10.1 billion.

Neil Mawston, who is the  Executive Director at Strategy Analytics, said: Global smartphone shipments reached a robust 353.3 million units in Q1 2017. The top-five most popular models together accounted for 1 in 6 of all smartphones shipped worldwide during the quarter.”

According to estimates, Apple iPhone 7 shipped 21.5 million units and had market share of 6% globally in Q1 2017. The iPhone 7 the world’s most popular smartphone model, till date. This is because it has a user-friendly design, many supporting apps, and retail availability. Apple iPhone 7 Plus, which has a bigger screen and is more expensive, shipped 17.4 million units. It has the second place on the list. It has 5 percent market share globally in Q1 2017. So, Apple made 3 of the most popular smartphones in the world right now. OPPO R9s delivered 8.9 million units and ha the third place. It has 3 percent market share in Q1 2017. OPPO may not be so popular in the West, but it is very popular in China and it is gaining popularity in India as well. The R9s has features such as dual-SIM and fingerprint. Samsung has two models in the top 5 list too. The Galaxy J3 has 2 percent smartphone market share worldwide. It has the 4th place on the list. The Galaxy J5 has 1 percent worldwide share. It is the fifth most popular phone in the world. J3 and J5 very popular in Europe and Asia. OPPO’s first quarter revenue was $ 5.41 billion. Huawei made a loss $ 6.74 billion. OPPO’s operating profit was $ 254 million, more than Huawei’s $ 226 million (about Combined RMB 1.54 billion). 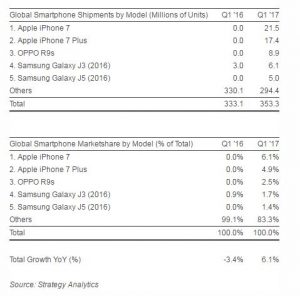 From the entire mobile phone industry chain point of view, manufacturers continue to take the cheap line for the cost control. This allows them to squeeze cost. But, the focus on quality should not be removed. It does not make sense to invest in research and development but forget the quality of the phones.