iPhone 7 Plus Retro is Classy and Expensive

Home » Blog » iPhone 7 Plus Retro is Classy and Expensive

Do you neither want to buy an iPhone nor an Android because they are too mainstream? Do you need something different? Then iPhone 7 plus retro style is all you need. It has the functionality of an Apple phone and a retro design from ColorWare. What more can we ask for? 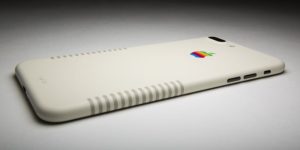 ColorWare has been gracing Apple’s products since the last few years. They do so with beautiful special edition paint jobs which remind of vintage Macintosh products. Earlier this week, the ColorWare introduced its latest retro design for iPhone 7 Plus. The iPhone 7 Plus Retro Edition is repainted in a 1980’s beige, has darker stripes to resemble the vents in older computers. The monochrome Apple logo is replaced with the one in classic rainbow stripes. ColorWare has released many other retro-styled Apple products before, including the MacBook, MacBook Air, iMac, and iPhone 6S. They have all appeared on the company’s site. Those models were only sold in limited quantities, but the iPhone 7 Plus Retro Edition is in available to anyone who is willing to buy one. Apart from the price factor, iPhone 7 Plus Retro is one of the best custom iPhone . ColorWare’s custom paint jobs are not affordable and the retro styling will be expensive too. The iPhone 7 Plus Retro Edition will be available only in unlocked, 256GB model for a $1,899. That is almost twice the Apple’s $969 price for the phone.

What do you think of iPhone 7 retro plus? Is it unique, or too expensive to be even considered? Let us know in the comments below