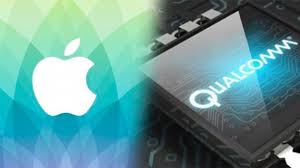 iPhone 8 will not be capable of gigabit cellular connections becaue of Apple’s legal battle with Qualcomm, modem supplier for Apple. The upcoming iPhones will suffer because of the Apple Qualcomm feud.

Apple get modems from both Intel and Qualcomm. For gigabit internet speeds, currently only Qualcomm’s X18 LTE modem works. The 4 major carriers in America are all ser to use this to give users faster download speed. Hardware manufacturers are making new products to give the users this experience in the future. For iPhone 7, Apple used Intel to increae baseband but Inte’s performance is weakr than that of QUalcomm’s. The latest reports show that Qualcomm’s modem can provide 1GB / s network transmission speed. Although Intel is also developing a similar level of demodulation to the demodulator, but it seems it will not be ready for the September release of the new iPhone. Apple and Qualcomm are currently fighting a legal battle in many countries and suing each other. Apple could have used Qualcomm’s components for its upcoming iPhones for gigabit connection but it does not want to rely on its legal opponent. In the end, Apple with make devices with both Intel and Qualcomm modems instead of having faster speed with Qualcomm devices. Apple wants to divide its user according to faster speed and a standard LTE connection. It wants to reduce Qualcomm’s stronghold across the world. Samsung does use Qualcomm’s products, so that means Apple will have a disadvantage. According to earlier news, Apple this year plans to launch three iPhones: iPhone7s, iPhone7s Plus and iPhone8. iPhone8 will use double glass + metal frame design style, and the whole glass shell will be the key to the application of wireless charging technology of iPhone. There will be no physical Home button, display edge to edge design, borderless display embedded in Touch ID fingerprint sensor and camera. The iPhone 8 will be an unprecedented upgrade in the iPhone family, because of the design, configuration, screen, shape and so on. So this pushed the cost of the iPhone 8 , which makes the final price of iPhone 8 1000 dollars.

Right now, we don’t know when the 4 major carriers in America will provide gigabit connections. Right now, it does not really matter if you have a faster modem. Customers will not even be able tp pickup the difference. It may take upto three to 4 years for carriers to introduce gigabit connections. By that time, most modems will be able to suport those speeds. Nothing to worry about for Apple for now. Maybe Apple should take a cue from Samsung which is focusing on its own Exynos processor to breakfree from Qualcomm.

What do you think about the Apple QUalcomm feud? Which party will suffer more? Share with us in the comments below!