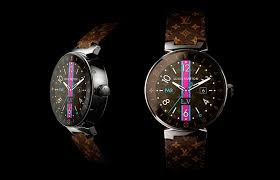 Tambour Horizon’s dial case is made of stainless steel with a 1.2-inch circular AMOLED display. The front and back of the dial are covered with sapphire glass, the screen outer ring has  24-hour time zone dial ring, allowing users to easily adjust the corresponding time zone according to the city, to meet the travel needs. The watch comes with a range of standard features for Android Wear, such as alarm clocks, timers, weather queries, pedometers, incoming calls, messages and email reminders; however, this watch does not include optical heart rate monitoring.

In addition to convenient time zone adjustments, Tambour Horizon has two unique features to facilitate the use of travelers. One is “My Flight”, which provides real-time flight information for the wearer, including boarding time, terminal and boarding information, flight delays, and so on. The second is the “City Guide”, which has the world’s seven most popular tourist city option on the touch screen surface to provide users with the city’s tourist information. Not only that, this feature can also be displayed by GPS near the restaurants, hotels and tourist attractions and so on.

The watch can be connected via Bluetooth to iOS and Android devices, but also Wi-Fi connection. Tambour Horizon starts at $ 2450, £ 2140, $ 3450, or $ 17,700, compared to the $ 1,600 TAG Heuer Connected Modular 45 smart watch and $ 1,500 Apple Apple Watch Series 2 Hermes Edition (Hermès Edition) expensive. But compared to Louis Vuitton’s other watch series, Tambour Horizon is very affordable.

At present, Tambour Horizon smart watches are available in three colors (graphite, brown, black) to choose from, and there are 60 kinds of removable straps (including 30 men, 30 female models) to facilitate the user with.