Microsoft and Baidu Join Hands For Apollo Self Driving Cars 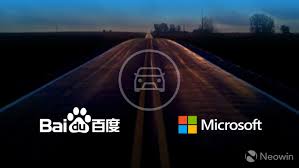 According to media reports, recently Microsoft officially announced that it will work with Baidu company to carry out automatic driving technology research and development. Microsoft and Baidu will be in the intelligent cloud services market to start more cooperation. At the beginning of this month, Baidu announced at the AI Conference that they would cooperate with Microsoft in the field of automatic driving, but the specific news was not disclosed.

Kevin Dallas, corporate vice president of Microsoft, said in the announcement that Microsoft is pleased to be able to cooperate with Baidu in the field of automatic driving.Microsoft’s global cloud AI (artificial intelligence), machine learning and deep neural network capabilities are applied to these data to speed up the work that has been done and make the autopilot vehicle safer. As early as April 19 this year, Baidu released the “Apollo program” to the automotive industry and automatic driving partners to provide an open, complete and secure software platform to help them combine vehicles and hardware systems, and quickly build a set of their own complete autopilot system.

Apollo is more open than Android and more capable. Apollo has grown in scale, and only the conference has gathered more than 50 ecologies including car manufacturers, tier 1 suppliers (Tier1), technology companies, ADAS suppliers, bottom parts suppliers, and academics and government agencies partner.