On the windows 10 anniversary, Microsoft rolled out an update that whose highlight is definitely the Microsoft Edge browser. The new Edge browser has come with much more accessibility, security and reliability and is still expected to bring some more groundbreaking changes.

Microsoft released a very detailed blog explaining the new and improved features of its new Microsoft Edge browser. Microsoft Edge’s prominent features include full support to extensions and of some very popular services like Pinterest, Amazon, Adblock , Evernote and many more are yet to launch their extensions to the Windows Store as Microsoft reports.

However it is known that the number of add-ons that are up for use are not much and need to be upgraded. This is explained by Microsoft’s strategy which was to first bring vital extensions to Microsoft Edge and then include more such add-ons that improvise user accessibility. 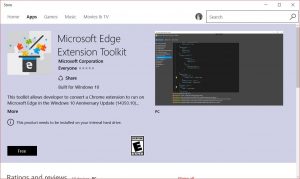 One of such tools is already up for grabs on the Windows Store that converts Google Chrome extensions to Microsoft Edge, called Microsoft Edge Extension Toolkit, which completely fulfills the Microsoft’s extension to make their new Edge browser to be fully compatible with Google Chrome.

Let’s not forget the main feature that makes Windows so popular among its users and in the market is the “user-friendliness”, which Microsoft still aspires to strive on with their strategy in building Microsoft Edge. To improve overall user experience, Microsoft  has made managing browser tabs much more comfortable that includes marking favorites,  pinning tabs and most importantly right clicking on any picture shows the option of launching ‘Ask Cortana’ that fetches related information.

Another criterion that Microsoft is focusing on is to make Microsoft Edge the most accessible and approachable browser ever…. According to HTML5 Accessibility’s browser benchmark Microsoft Edge has obtained the perfect score and is by far the only browser to do so.  Pretty big huh??

Microsoft Edge among its many others, provides enhanced features of assistive support including screen readers, narrators for browser guidance including address bars. The Microsoft Edge browser ‘s rendering engine makes it possible to create and build more accessible and user friendly experiences based on HTML 5, thanks to its all new accessibility architecture.  Microsoft Edge has proven to be power efficient and Microsoft claims that their browser is remarkably 90% more power saving  than its competitors.

The browser  has now made possible to receive notifications from open applications such as Skype for Web, Whatsapp and Slacker (inspired mostly from notification control of Windows 10 Action Center). These notifications are of opt-in type and are manageable just a right click away from browser settings.

Coming towards the security features,  the Flash content is prevented from intervening with web pages which are isolated from the rest of the Operating System.  Flash Content is run in a separate App Container  and saves us from flash exposure. PCs supporting Windows Hello allow heir users to login to online services by their fingerprint or face capture.

Up for grabs for free…

The core purpose of Microsoft was to make conversion of chrome extensions as effortless ad possible requiring little or no modifications or improvisations and Microsoft Edge very successfully works  in this regard.

In the Windows 10 Anniversary Update (14393.10) edition, the developers state that the toolkit allows Chrome extensions to run on the Edge browser by creating JSON manifest entries that bridges to Google Chrome.  For now the application is still in its raw state and there is still much room for improvisations but nonetheless it proves that Microsoft has bigger plans to make Google Chrome extension porting easier and more effortless.

For now extension support is only available on Windows 10 PCs exclusively and not on mobile devices. Microsoft states that they want to pinpoint their focus completely on making Microsoft Edge’s extension conversion developed to perfection on PCs and after some time it might land on mobile devices as well which is expected to happen in RedStone 2 which is due in 2017 spring.

If you have tried Edge yourself, please leave us a detailed comment ex