A New Milestone: Facebook Shares Quadruple In A Period Of Five Years 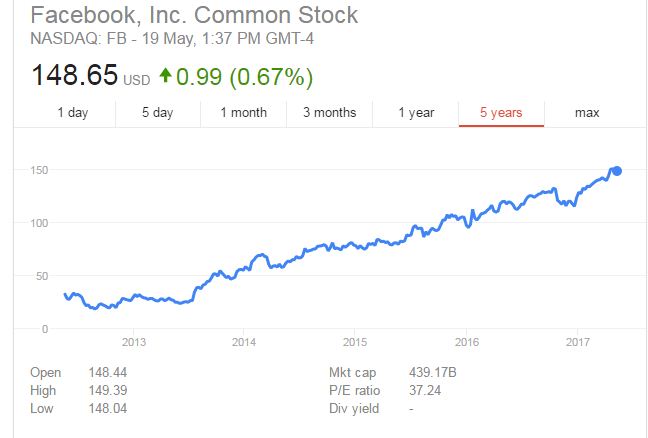 According to foreign media reports, Facebook once again reached a new milestone last night. Facebook has been listed on the Nasdaq for five years. In the five years of listing, Facebook shares rose 244%, and its market value is close to 420 billion US dollars. This is a very important moment for Facebook, and for the company founder and CEO Mark Zuckerberg.

Facebook had its initial public offering (IPO) in February 2012. It started selling stock to the public after three months and reached an original peak market capitalization of $104 billion. On July 13, 2015, Standard & Poor’s 500 Index listed it as the fastest company to reach a market cap of $250 billion. Initially, the stock issue price was 38 dollars, and the opening price was $ 42.05. At the close of a recent trading day, Facebook shares were at $ 144.85 and the market capitalization was $ 419.8 billion. The well-known recruitment website Glassdoor recently released a list of employers with best practices. Most of the list was occupied by Silicon Valley companies. Facebook was included in the list. Facebook gives interns a monthly salary of 8, 000 USD. Although it is the median, the figure shows that even some interns command better salary at Facebook than an average American. It also shows Facebook’s operating strength. Instagram, which is owned by Facebook, has also broken records recently. Last month, Instagram had more than 700 million active users and reached another milestone. In the past four months, Instagram’s new users have reached 100 million, doubling the rate compared to the previous two years. At this rate, by the end of 2017, Instagram users may reach 1 billion. Some analysts believe that this recent growth spurt experienced by Instagram is because of the features Instagram has recently copied from Snapchat.