Remember those times when your last worry was your phone breaking down into pieces? Remember that time when you didn’t have to charge your phone every three hours? If you are a teen, you probably won’t. But if you are a millennial like me, your first phone was probably a Nokia.

Good old Nokia. Long lasting. The battery would last you ages. Its screen would remain intact for ages. And who could forget Snake, the game we were all addicted to as kids. All that changed with the advent of Apple and Android. Nokia failed to keep up. The newer smart phones swept the world off its feet. Nokia died a slow death. It did try to revive with its own smartphones but it was too little too late.

Nokia was the market leader for mobile phones. They made it easier for a common man to buy and keep mobile phones. Unfortunately, they relied too much on the phones they were producing and thought the world would buy it forever. Around the same time Apple became innovating, and Android phones were also launched. They were like mini computers in your palm. The Nokia phones started looking ancient in front of them. And just like that, Nokia died.

Also Read: Studies show iPhone is more prone to failure than Android                                                                                As they say, everything has its own share of problems. While smartphones are incredibly useful, they are very fragile and their battery doesn’t last long. This could be a menace if you travel a lot. The world had started reminiscing about Nokia, and guess what? It’s back. Nokia has re launched 3310.     In the words of their website, the icon is back. It has battery standby for upto a month. And most of all, it has Snakes! Nokia is trying to make comeback by the reintroduction of 3310 in the market. It was a cult favorite, and its memories are still fresh in the minds of the people. Have a  look at this chart of Google Trends from 1 December which shows the trend of interest people have in the Nokia compared to other brands. 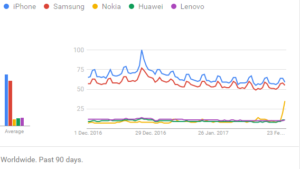 As you can see, the interest in Nokia has risen considerably over the past few days. The point to note here is that it’s not about how many people will go out to buy 3310, it’s about the emotions that this phone has given birth to. It has struck everyone with nostalgia, and brought back memories. This is a perfect strategy by Nokia to lay grounds for the introduction of more tech savvy phones.

Unlike the old one 3310, this one has a camera. It definitely isn’t like the cameras most smartphones have, its 2 MP. It also has micro SD card slot. One let down is that it doesn’t have GPS and 3g. This could be a problem as most phone carriers are ditching 2g now. They could lose out on customers who intend to buy a basic phone but whose mobile phone network is in the process of ditching 2g.

Another downside is that 3310 is priced at £49 or around 6300 PKR which I think is a bit too much for a basic phone. Nokia had a brilliant opportunity here to penetrate the market again, but this price tag could be their undoing. It’s a norm in Pakistan for people to carry two phones: a expensive one and a basic one. This is because mobile snatchings are common, and so people don’t like to carry their expensive phones while on the street. I am assuming this to be the case in other countries with street crimes too. Nokia had this market segment waiting for them. The price might deter a lot of people from buying 3310 now.

3310 has got mixed reviews so far. Some are appalled that it has been redesigned and no longer resembles the original one. Some don’t see the point in the relaunch. It is still too early to say much about it.

Also Read: Samsung to bring its refurbished flagship phones to the market.

All in all, Nokia is back and it has managed to get people talking about it again. Now its upto them how they capitalize on the attention it has gained, and proves its worthy of another chance by showing innovation. In a way the relaunch of this phone is symbolizes the very reason that led to its death: being stuck in the past. With the launch of this phone, nothing new has been done technologically. If Nokia wants to cater to the market for basic phones, it might die again. And this time it wont be able to resuscitate. This would be the final blow and in raw words, it would be a shameful death for Nokia.

Let’s hope they will up their game.

What are your thoughts on this phone? Will you consider buying it?