Nokia 7 Plus Spotted On Geekbench 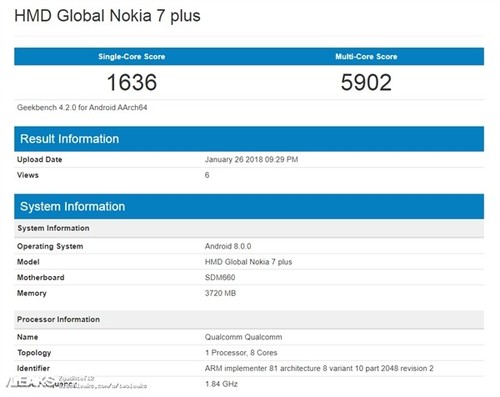 Ever since HMD Global has taken over, Nokia seems to be on the road to recovery. According to Slashleaks, a new phone called Nokia 7 Plus has appeared on the GeekBench 4 database.

The phone will have Qualcomm Snapdragon 660 chip, with 4GB of memory, single-run 1636, and multi-core run 5902. Taking into account the fact that Nokia’s current main Android machines are equipped with Snapdragon 630 chips, such as Nokia 7 and Nokia 6 second generation, the Nokia 7 Plus launch will be one of the highest-profile models.

Since it is Plus, the screen size is expected to be upgraded. At present, Nokia 7 is only a 5.2-inch screen phone. According to the current trend, Nokia 7 Plus probability will be upgraded to an 18: 9 full screen, while using fingerprint and upgrade Zeiss lens quality, such as upgrading to double shot.

Considering that Nokia 7 already has 6GB of running memory, then Nokia 7 Plus will also have both 4GB and 6GB storage specifications, while the battery capacity will increase.In addition, equipped with Snapdragon 660, Nokia 7 Plus can directly play at 60FPS high frame rate mainstream levels of mobile games. Taking into account the fact that the current Nokia 7 price is 2499 yuan (396 USD) and 2699 yuan, it is expected that Nokia 7 Plus 4G + 64GB version will be 2999 yuan (475 USD).