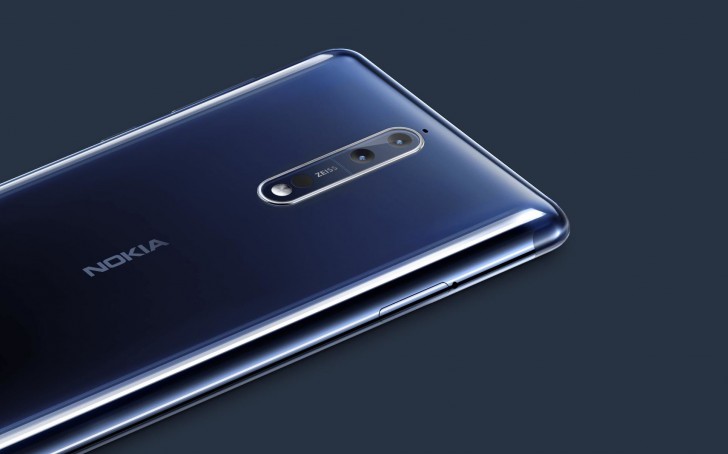 HMD Global has unveiled a revised version of its Nokia 8 Android smartphone at MWC 2018.The new Nokia 8 is now nicknamed Nokia 8 “Sirocco” and has been thoroughly redesigned.

The new Nokia 8 Scirocco is touted as an ultra-compact powerhouse. Striking is its new look with ultra-slim 2 millimeters fine almost sharp-edged-looking pages. The 5.5-inch edge-to-edge pOLED display features 2K resolution, a slightly curved display, and very narrow edges. HMD uses the front very well, so almost format-filling and makes the Nokia 8 Sirocco with its smaller edges and shaped outside curves to the most beautiful smartphone of the new series.

The new Nokia 8 series is powered by the already well-known Qualcomm Snapdragon 835. As expected, HMD has not been able to rely on the American’s high-end processor, but it still has 6 gigabytes of RAM and 128 gigabytes of internal memory. Its strengths are completely different. Waterproof (according to IP67) and insensitive to cold, Nokia relies on Android One.

HMD relies on the powerful smartphone for powerful storytelling features such as enhanced dual-sight mode, Zeiss optics, and tuned-in acoustic features. The camera features two rear-facing sensors, a primary wide-angle camera for low-light performance and a secondary 13MP camera with dual optical zoom.Pro camera mode gives you full manual control of each captured image – a great feature for all photographers.

The Nokia 8 Sirocco gets a quick charge function, which brings the 3260 mAh-strong battery in 30 minutes to 50 percent battery charge. Also announced was a single-SIM variant as well as a version with dual-SIM. The Nokia 8 Sirocco is expected to be available from mid-April for 749 euros. An exact date does not exist yet.