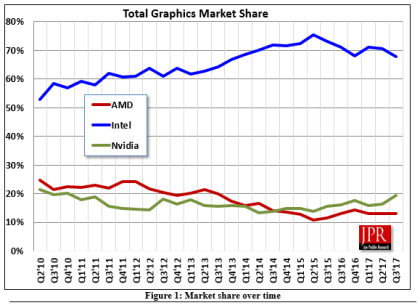 Is Nvidia abusing its current powerful market position to move graphics card manufacturers through a partner program to fully align with the GeForce brand?These and other serious allegations have now been raised by the head of the US website HardOCP.Nvidia is still silent on the allegations.

Nvidia has announced on March 1, the new marketing initiative “GeForce Partner Program”.But now the company faces loud criticism and serious allegations because of the plans to work closer with graphics card manufacturers. Kyle Bennett, head of the US website HardOCP, claims in his report that after discussions with corporate contacts and insight into relevant documents, he has to paint a very bleak picture of the project. He said that the consumer’s freedom of choice is being decimated If he looks at the program guidelines. He firmly believes this will happen and that’s why he is worried.

As Bennett goes on to explain, for reasons of transparency, he wanted to state that AMD had made him and other American journalists aware of “this story”. The information provided by the rival company would not have been sufficient for a report, which is why in the last three weeks discussions with graphics card manufacturers have led to the allegations. None of the seven companies contacted officially wanted to make a statement about the Nvidia program, but in all interviews clear allegations would have been made.

Also Read: Nvidia And Continental To Develop Self Driving Cars

For Bennett, it is above all a rule that companies must follow if they want to be part of the partner program, which is to be criticized sharply. Accordingly, manufacturers commit to Nvidia that their gaming brands align exclusively on GeForce. He was able to see documents containing this regulation. In return, companies would receive certain bonuses, including preferential delivery of new GPU generations, game bundle deals, rebate programs and financial support for advertising.Bennett had asked Nvidia on February 22 for an opinion, but so far received no response.