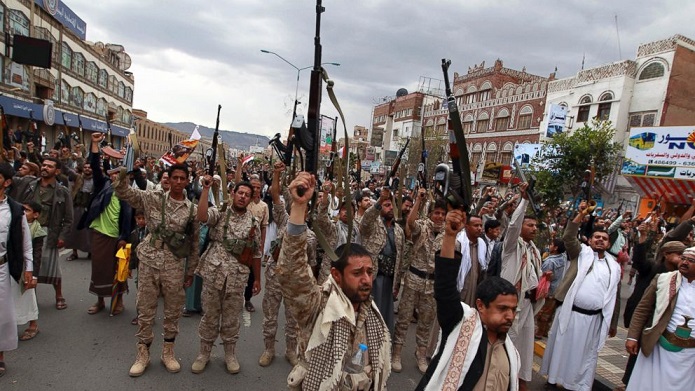 Yemen, a kleptocratic country, has always been a difficult land to rule. It was a flourishing state from around 1000 years, ruled by various mankind including Sabaeans, Himyarites, Romans, Ethiopians, and Persians, later conquered by Muslim Arabs and ruled under Ottoman Empire. It was also ruled by British protectorates, it then became North Yemen and South Yemen which united in 1990 to become what we present day call Republic of Yemen.

Today once again Muslims are facing a harsh reality when one Muslim is fighting another for sake of nothing. This raises a question for whole Muslim world that we need to answer straight away to ensure our existence, our sanctity in this very world which is at stake from many years, why are we fighting? In today’s world our existence is challenged in almost every way possible by non-Muslims. Muslims are treated as most condemned humans living on the face of earth and the reason for which are we ourselves. This consistency in our weird behavior for our own brotherhood has led to weakening of structure of Islam, and its extremity can be easily understood that we were unable to respond properly against blasphemous acts done by Jewish community, though we were unable even to get them removed from websites, we are blamed for 9/11 and we are unable to defend it and as a result Afghan war erupts. Israel continues its massacre in Gaza Lebanon and Palestine and dare not stop that barbarian country from doing so, these so-called “Pacifist” countries don’t even know etiquettes of war. There are many other cases that lay open and we don’t respond to them and the reason is our own weakness. We can’t be so shameless to kill our own brothers though our Holy Prophet Muhammad said; “None of you can truly be said to believe until he wants for his brother what he wants for himself.”

It becomes so disastrous that a Muslim country is fighting another. Now we need to know and understand how this riot started? Is it the part of The Great Game that caused oil crisis and politics, and economic recession that shook the whole world and caused thousands unemployed. Or is it the respectable Black Water trying to raise riots like it did in Egypt.

At this point of life we really need to understand what is happening around us, interpret it, and respond accordingly, be a true Muslim and gain our respect back. Individuality counts. We would have to act fast to save a respectable Muslim country Yemen to save souls of our brothers before it’s too late. Matters are sorted by discussions not weapons