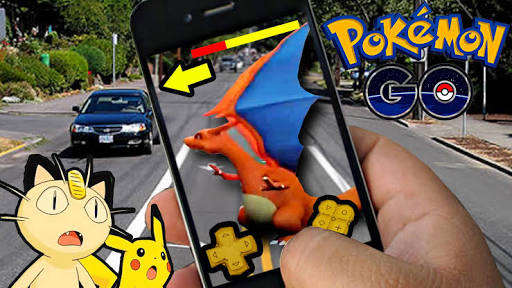 Go to a park. Wait you don’t even need to go to a park. Just head outside your home to a place of people and you’ll see people walking stupidly here and there with their phone screens in front of them bumping into each other or the side poles. Who am I kidding? I myself am one of those stupid people. Well don’t think of them as crazy or some kinds of phone addicts. Well they are addicted for sure but it’s a different kind of an addiction we are talking about here. The kind which parents don’t need to freak out if their kids catch and for which you need not go to a rehabilitation center. This addiction is the addiction of cute little creatures with special powers that we call pocket monsters or shorty Pokémon.
How do you look like playing Pokemon Go

This Pokémon fever is not new. Rather quite a few years have passed since these adorable creatures first appeared on the screen as a cartoon season for kids. Everyone was amazed at the popularity it gained in the children of those days in a short time. What no one imagined was that this craze for Pokémon would be surpassed by none other than a game for smartphones on these very own little monsters. Yes the start of this July the much anticipated Pokémon game Pokémon Go hit the market and the app stores for the IOS and Android. Yes there was much hype already before the game with people waiting for the game to arrive but the extent of success that they pocketed was indeed beyond expectations.

The Pokemon Go
Nowadays Pokémon Go is storming, not only the smartphones of millions across the country but also is one of the most trending topics on the social networks. Everyone has a favorite Pokémon to catch. Someone wants the sparkling cute Pikachu, where as someone wants a fire breathing Charizard, one might be a fan of the little blue bear Bulbasaur while a power loving boy will be lurking around to find a Machop. They have introduced the innovatively advanced concept of Virtual reality to the good old concept of catching pocket monsters, gaining exp, upgrading levels and fighting rivals, and produced a master piece. First introduced back in 1995 as a small Gameboy Advanced game, who would’ve thought that the 2016 version of this game Pokémon Go would overtake a popular app as Tinder in terms of downloads. That too by almost a double.
The new thing that Pokémon Go has introduced us to is the Augmented Reality. Now people know what reality is. The solid things around us that we see and touch are the things classified as reality. Virtual reality on the other hand is what you see on screens. An augmented reality comes into play when you pick the scenes from the screen which maybe characters or props and overlay them on the actual reality. This is what happens in Pokémon go where this fictitious Pokémon characters are seen walking and running on the road through your camera.
Seeing from the success that it has seen we can deduce one thing for sure that the love for pocket monsters put in hearts of people in the 95’ cartoon series hasn’t lessened a bit and Pokemon Go has done a great job in using that love and cash it to make an all profiting business. No I think I have told you enough about the game. My phone just signaled a Squirtle roaming around and I am rushing as “I gotta catch’em all.”