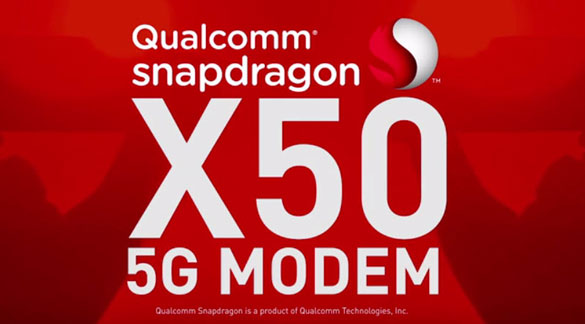 The chip company Qualcomm has introduced the Snapdragon X50, its first new modem with support for 5G networks.The modem will also enter smartphones as part of the next generation of Qualcomm Snapdragon processors and is expected to be tested by various mobile service providers and device manufacturers earlier this year.

The Snapdragon X50 5G modem operates in the range below six gigahertz and in the so-called mmWave spectrum (millimeter waves). By combining various technologies to bundle transmission channels, the new modem should be able to realize connections at up to five gigabits per second in the downstream.
Also Read: Broadcom Is Still Pursuing Qualcomm

Also Read: Snapdragon 670 With Dual Core Configuration And Hexacore To Be Available For Cheaper Smartphones Soon

In the meantime, the manufacturer is already drumming for the flagship devices of the year 2019 and also names some hardware partners, who should then come along with 5G-enabled smartphones with Snapdragon X50 modem. Specifically, the company names ASUS, HMD Global (Nokia), HTC, LG, Oppo, Sony Mobile, Xiaomi, and ZTE.

Qualcomm has not yet specified concrete details of its modem but has promised that other devices will be equipped with the X50 modem in addition to smartphones. This refers to the so-called “Always Connected” PCs, so laptops, 2-in-1s, and other models, in which are used Microsoft Qualcomm ARM-based CPUs with Windows 10. For Windows users, this means that, as might be expected, there will be updated new Windows 10-based ARM products next year that will provide them with a 5G-capable modem with, at least in theory, tremendous transmission speeds will be available.
Source