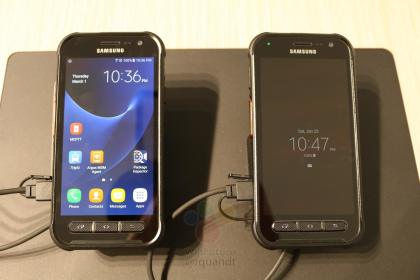 At major trade fairs such as the Mobile World Congress, some devices are often overlooked. This also includes a Samsung device, which probably all media representatives have ignored. The device has the model number SM-G888. 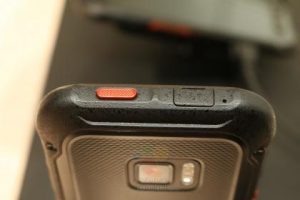 The model number is used by the insiders to refer to a product. Earlier it was rumored that SM-G888 is the model number for the first foldable smartphone from Samsung, also known as the Galaxy X. But the device that is actually behind this name is something completely different, namely a rugged phone for emergency services.

The SM-G888 also has no marketing name, which is also because it is sold exclusively to very special customers. Samsung calls it PS-LTE Phone and the device is based on the Galaxy S7. They mentioned special target group authorities and emergency services. Samsung will sell it to police, fire department and also the military.

As mentioned, this is a Galaxy S7 trimmed on Rugged and that means it’s extra rugged.This, of course, includes protection to IP68 standard. This is also what many normal devices offer these days, but the PS-LTE Phone is said to be more durable than the traditional smartphone. Also not common is the big red button on the top, it can be used during emergencies. On the side, there is another not quite usual button, namely one for a walkie-talkie functionality. This also explains the name Samsung PS-LTE, because PS stands for public service, ie public service and thus this functionality can be implemented via the LTE network.

Also on the back is something special, namely a triple LED flash. This is intended to provide a lot of light in emergencies and other operations. In order for the device to last a long time, inside is a 4500 mAh battery, which is also interchangeable. It also has a 5.5-inch display with 2560 x 1440 pixel resolution, 4GB of RAM and 32GB of storage

The SM-G888 buried – at least for the time being – the rumor about a foldable Samsung smartphone, which was allegedly developed under this device number. Samsung S9 and S9 Plus were the protagonists of the Mobile World Congress, but the South Korean producer seems to be already preparing to further expand the catalog by renewing the offer of rugged smartphones.