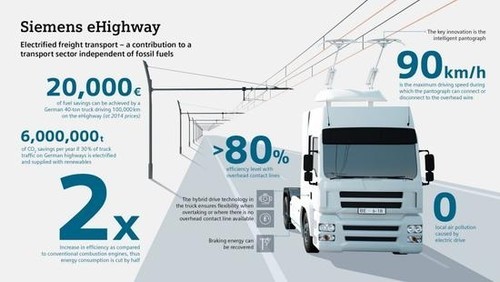 Last week, Siemens announced that it will cooperate with the German state of Hesse to lay in the A5 federal highway 10 km of air contact network freight lines, for the construction of Germany’s first electrified highway eHighway. Siemens will be responsible for the overall system planning, construction, and optional maintenance services.

This electrified road is mainly composed of overhead lines on the freeway, requiring trucks to have smart pantographs and hybrid systems. When driving, the truck connects the intelligent pantograph and catenary through the sensor system to obtain power, and when the pantograph runs more than 90km, it automatically disengages from the catenary.

The biggest benefit of this program is the reduction in energy consumption and emissions reductions. It is reported that the energy efficiency of the electrified road is twice that of the internal combustion engine and does not produce any exhaust gas. Siemens first presented this eHighway idea back in 2012. According to Siemens website, “the system will be installed on the A5 federal autobahn between the Zeppelinheim/Cargo City Süd interchange at the Frankfurt Airport and the Darmstadt/Weiterstadt interchange.”

In 2014, Siemens, in cooperation with Volvo and local truck modification companies in California, announced the construction of an electrified catenary system on a 3.2 km long expressway extension near Los Angeles and Long Beach. Then in 2015, the company also announced the establishment in Sweden to support hybrid trucks catenary system, the main erection of sections in northern Stockholm two kilometers long E16 highway.

Globally, because of the growing burden of freight traffic, governments are also facing the pressure of carbon dioxide emissions. Relying solely on the railway system is difficult. The electric truck program was not considered feasible because of battery life problems. Two weeks ago, Tesla electric truck road test raised new questions about battery issues. If Siemens eHighway proves to be feasible in Germany, it can be made in other countries too.