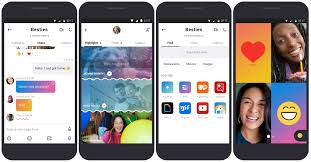 It seems the world is out to copy Snapchat and make their own app a newer and improved Snapchat version. Earlier Facebook, Instagram and Whatsapp copied heavily from SnapChat, so Microsoft thought its about time they also take a leaf out of Google’s book and copy some stuff from SnapChat. So enter the Skype’s Makeover.

Skype’s makeover has a new stories like feature. It is being called Highlights but apart from the name there is nothing original about it. However unlike Facebook’s unapologetic approach towards plagiarism from SnapChat Microsoft is trying to defend its situation. The officials at Microsoft are arguing that the update had been planned for well above a year now. Since 2006’s video sharing, there had been no update to the highly popular video calling app.

Now the app gets totally revamped and has a better display. The camera is a swipe away and you can immediately start it in your chats. It will have chat bots and add-ons a bit like Facebook Messenger to enhance the user chat experience.

As far as the Highlights feature of the Skype is concerned you can take a picture or photo, embellish it with smileys, text and colors. Then you can either share it with other friends and family or you can enter it to the Highlights feature of your Skype then all the contacts on your list can view it. However the Highlights are available for a week and not just 24 hours. So you can spend time on them to beautify and embellish because they won’t disappear before everyone has seen them. People can react through an emoji or a thumbs up type of response to a person’s highlight.

So have you tried the new version of Skype? Let us know about your experience with Skype’s Makeover in the section below.