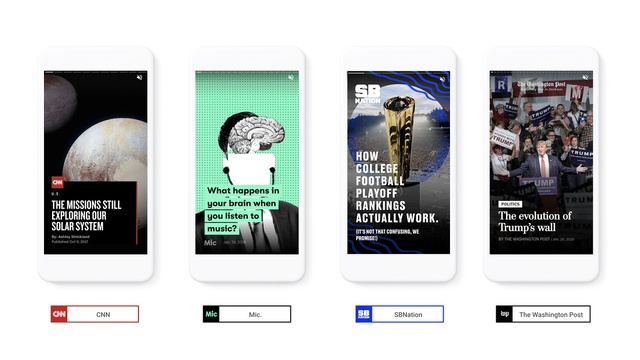 The “Stories” concept was pioneered by Snapchat, giving users a place to publish ephemeral pictures and short videos that disappear after 24 hours. It has grown especially since Facebook has copied its feature in all its social services, and now Stories are also reaching Google directly in search. AMP Stories can be made by online publications and will appear in a special stream, above other results.

Already everyone knows the concept of Stories. They appear as a slideshow, each panel representing a new photo, a new clip, or a text field. Google’s AMP Stories format will allow publishers to make articles of this genre in any combination, each “story” is dedicated to a single subject. Thus, each article can be transformed into a multi-page story, the videos can even include sound. By default, story stories start with the sound off, but it can be started at the touch of a button.

It seems that this capability will only be enabled for sites that use Accelerated Mobile Pages (AMP), Google’s mobile display system. The integration of AMP Stories should be simple for those who already had the site optimized for AMP, but at the moment there are no tools to help create stories in a fast and efficient way. The success and longevity of this concept will, however, depend on the emergence of such tools for all those using AMP, as currently only very large sites with large developer teams behind have received access to AMP Storie’s beta from Google and can publish them at this point.

Among the partners are websites such as CNN, Mashable, Mic, Vox Media and The Washington Post, whose articles should appear for those who access the test link. A small mention: AMP Stories are currently showing only on mobile, so you’ll need to access the link on a smartphone with either Android or iOS. All you have to do is look up the name of the publication, and the AMP Stories stream will be displayed beneath the ads above your normal search.

The concept is exciting and combines the usual way in which users began to consume mobile content with traditional media, not only providing entertainment but also useful information in this way. It remains to be seen how popular AMP Stories will be, and whether they will receive the necessary support from Google, or will remain in history as yet another failed company’s experiment.