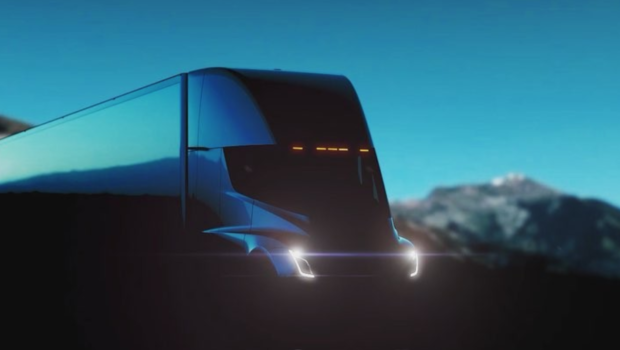 The electric car manufacturer Tesla has now presented its first truck.It has been clear for some time that this is being developed – but ultimately the presentation contained a few surprises that would make the vehicle called “Semi” a real Tesla.

Because the company of Elon Musk is now known for not simply replacing combustion engines with electric drives. The developers also dare to question some old-fashioned concepts. For example, the Tesla Semi expresses that in the wind tunnel the truck does not behave like a block but like a sports car.

As Elon Musk pointed out, a normal diesel truck has a drag coefficient, ie a CW value of 0.65 to 0.7. The Semi brings it to 0.36, which is less than in a  sports car like the Bugatti Chiron. And that ultimately has a significant impact on performance when it comes to tackling long distances at highway speeds.

Tesla assures that the Semi-Truck will take you on a single battery charge to a range of 800 kilometers – and fully loaded with 40 tons on the highway. And if even longer distances have to be mastered, the prescribed breaks are enough to refill the battery. On a normal supercharger, with which the Tesla cars are charged, should be within half an hour enough energy for the next more than 600 kilometers in the battery.

Also special is the cockpit design. The driver sits here in the middle of a single seat – which is quite feasible given that co-drivers are rarely there anyway. Of course, various control elements in the cockpit are reminiscent of the cars, of which Tesla has taken over at the Semi and various other components. The tractor also comes quasi with a rear-wheel drive. The four wheels of the two rear axles are driven by four electric motors. That should offer many advantages – from a better road holding until then, that one arrives even if necessary with two failed engines still somewhere. Furthermore, Tesla emphasized the power in the engines: These should be able to accelerate the truck much more than any diesel truck and even on slopes in the mountains, where the normal tractor slowly fight the mountain. You will be able to drive the Semi at full speed even when you need to drive on high mountain routes in the Rocky Mountains.

Currently, Tesla has not given any indication of what the Semis will cost when they hit the market in 2019. The purchase is certainly not cheap. However, the prices per kilometer driven are lower than those of a diesel truck and also the mentioned performance advantages bring a lot of savings. In the hard-calculating industry, the high start-up costs are likely to be compensated quickly in many cases.