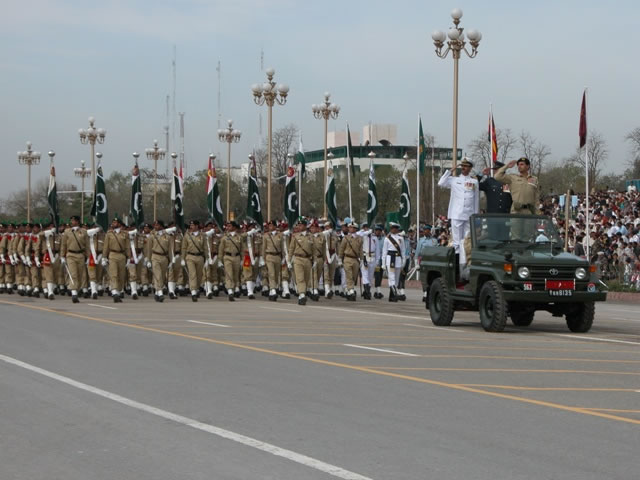 Pakistan had its national day parade after a 7 years hiatus. The country has seen terrorism attacks that have resulted in over 50,000 people to die. The parade held today has great significance than ever before as it reminded the masses that the country has not given into the terrorists and stand firms in its desire to establish peace and harmony. The parade had a lot for the world and the people to understand and feel proud of respectively.

The countries civil-military leadership stood together in great threat of terror attack and a handsomely turned out crowd rejoiced their arrival with the president accompanied by the presidential guards on horse backs was a splendid reminder of the colonial past. Modern jets were put to display with the air chief leading the formation followed by modern jet formations flying past the presidential podium. The morale of every Pakistani watching this went up and reinforced the safety of Pakistani land by gallant warriors.

The marching units kicked start the parade with armed forces and paramilitary forces dressed in full official regalia marched past followed by the young boys scouts and as a symbol of women empowerment the lady guide and a unit of Pakistan army’s female officers paraded through receiving great appreciation from the crowds. Last in the march were the elite commandos, the SSG also called the Maroon berets proved their mettle with the commando drill.

This was followed by the show of the countries modern missiles systems indigenously manufactured and their capacity to carry nuclear warheads sent the relevant message across the border. The latest tanks and armored personal carriers were followed by the newly invented Drones that will enhance the forces ability to meet the unconventional threat of terrorism with greater ease.

This was followed by cultural floats of the respective provinces that were beautifully designed to sum up the rich cultures of the ethnic groups and the cultural diversity of Pakistan and this was followed by the camel man march of Pakistan rangers. This added to remind us of the beauty of the vast country and the rich heritage of the desert regions.

The show stopper “Sherdil” acrobat display team of six k-8 aircrafts colored red, teal and white.it was a splendid show with the planes spraying colors into the airspace and performing different formations and finally split in mid air before vanishing into the skies leaving the crowd in cheers. Next up was the modern JF-17 multirole jet often called the pride of Pakistan as it’s the first third-generation aircraft manufactured by Pakistan. The plane circled the parade venue and flew past the presidential podium. This was followed by solo F-16 that stole the show with its amazing acrobatic maneuvers. This did not end here as the paratroopers 23 in all led by the commandant paratrooping School mesmerized the crowd. Last were the helicopters that held out the special unit commandos onto slings that kept the crowds captivated and with this the much awaited Pakistan day parade came to end with great pride for the Pakistani nation.