THE WRATH OF PRESTIGE

Home » Blog » THE WRATH OF PRESTIGE 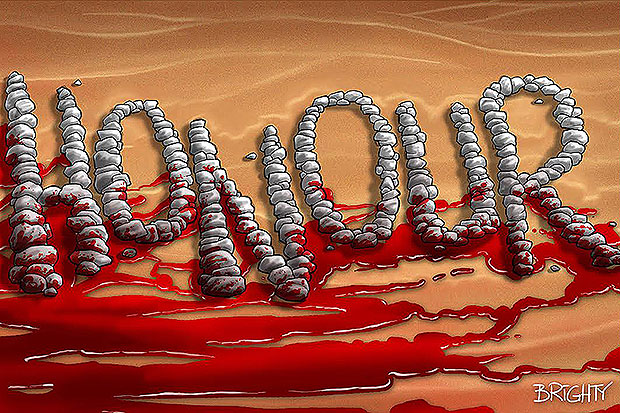 The heart rules the sentiments, while brain rules the rationality. However, sometimes when heart dominates the mind, it can shake the balance of life. But ironically this domination becomes inevitable in some cases, as in the case of those two lovers, who were deliberately planning to shake the balance of their lives.

But they were unaware of the “wrath of prestige”, which rules the culture, not only culture, but sometimes the blood also. They were giving enough room to optimism, but realism was not welcomed at all. At last their fate started to impose itself on their lives, making them run with coffins in their hands!

Their hands were tangled peculiarly, but depicting the chasers the power of their warmth for each other. The friction between their legs and the grass was making a haunting echo of despair. Their minds were sketching the irony of life, that how they became criminals for nothing. The girl made a pause, as her stamina also lost the hope, but they had to run, not for their own selves but for each other. The boy braced her, making her run again, with more zeal and more courage. She could be watching a robust future with her love, but was unaware of the following past. Ultimately, the chase reached the climax, which both of them didn’t desire. The triumph was in the hands of the followers, paving their way towards those who were drooped with fear. Their fate brought them in the feet of the demons. Her brother greeted her with a repugnant kick on her face, making her roll and roll. Before the boy could have retaliated he had been hit by his brother with a strong stiff stick allowing his warm blood leaving his body.

The time girl gained her senses, she had been dragged with her hairs in the feet of her father. The poise was accentuating in his personality, making him distinctive from others. But unfortunately his poise was not producing generosity, rather abhorrence. She put her daughter up to face his eyes, but those eyes were not keeping the parental love, but the skepticism regarding his honour. She was being killed by her own, but that executing knife was less tyrant than the hands using it. The boy was getting the deplorable treatment from his own family. The sticks were depleting every nook of his body, making the body frail for everything. But spontaneously a mighty blow with a gigantic stone slew him ending up his frailty with his life. The perpetrators were under a state of ecstasy, as they defended their honour and prestige. Their contention was making their heart to bulge more.

The eyes of the dupes were closed. They would be happy with aftermath of their death, as they provided a refuge to the prestige of their family and their cast. They clinched to add one more event of “honour killing” in the annals of their culture, a social curse which roars with full gusto even in 21st century.

I aspire if this fictitious event would have remained fictitious forever, but my aspirations evaporates into thin air when I find that the above fiction is less tyrant as compare to what happens in real. The debate on love deserves space in our society, there could be numerous opinions on it, but the matter of honour killing deserves treatment, rather any debate. How one can snatch a life on the basis of honour, prestige and cast taboos? Whether our country becomes a liberal Pakistan, or a conservative one, if such events will not going to stop then surely we will have to develop a new name for Pakistan, “The Honourable Pakistan”, but unfortunately this word honour would be a product of blood of many innocent lives.

This social curse is a part of our culture, but now some voices against this heinous stereotype kindles the spark of hope .This issue needs ample attention, and a step has been taken by talented film-maker of Pakistan, Sharmeen Obaid-Chinoy.

“A Girl in the river”, a documentary by Miss Sharmeen makes this crime a national debate that even Prime Minister swayed his attention towards this heinous cultural norm. We can’t expect the extirpation of this issue within few years, but the punishment to the perpetrators will surely deplete these social norms.