Windows 10 Gets A New Game Bar 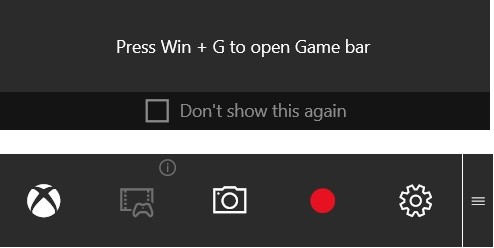 Microsoft is preparing for the next major update for Windows 10, which is currently under the code name “Redstone 4” developed, obviously the revision of the so-called Game Bar.In the future, the control bar for controlling basic functions during use of the game will turn out to be significantly larger and so probably easier to use.

As the team from Thurrott.com reports, the recently released Windows 10 Insider Preview Build 17046 has discovered early code of the new Game Bar, which is to be introduced with “Redstone 4”. It apparently replaces the currently very small and blue held Game Bar of Windows 10 and should be based for the first time on the Universal Windows Platform (UWP). This also allows them to take advantage of the effects available to other UWP apps.

The new Game Bar is much larger and will soon be equipped with the effects of the new Microsoft Fluent Design Language. On top of that, the new Game Bar can be used not only in a light but also in a dark version, so that every user can customize it to their own taste.Also new are the animations when opening and closing the bar.

Microsoft has also replaced the big Xbox Live avatar with a small display of the username.There are also small buttons for quick access to the Xbox Live profile, the mixer profile, the folder with the in-game recordings and the settings. Also, the clock now shown on the left is new, which certainly reminds of the clock in the charms bar of Windows 8.

At the new Game Bar, Microsoft seems to focus more on settings that are particularly relevant to users who broadcast their gaming sessions to other Internet services via blenders. These include buttons for recording video and audio.Of course, the work on the new Game Bar is far from over, after all, Microsoft has not officially presented it yet. Accordingly, some buttons are not in the right place or the wrong size.