Xiaomi has recently introduced the Xiaomi Mi Mix 2S, its new phone which is almost bezel-less at the top. As before, the Chinese manufacturer has opted to keep the design rimless on three sides. The XIaomi Mix 2S is the perfect combination of state of the art technology with high-quality materials. The phone is powered by Qualcomm Snapdragon 845 SoC. The phone also has some AI capabilities. 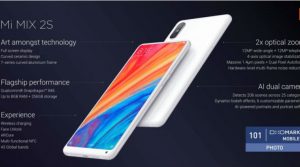 The phone has a 5.99-inch LCD display, which is particularly noticeable thanks to the nearly complete absence of pronounced display edges. It has a resolution of  2160 x 1080 and is FHD +. Xiaomi has not jumped the notch bandwagon with the Mi Mix 2S and has instead moved the front camera to the lower end of the front. So, if you are not a fan of the notch, but want a powerful phone, this could be the smartphone for you.

As with the previous model, the earpiece of the phone is attached to the upper edge. However, a normal speaker has been used for a piezoelectric vibration module. The screen of Mi Mix 2S has rounded corners. It is recommended to slightly tilt the phone when using the front camera to get better pictures when using the self-portraits. By moving the phone a bit, you can avoid unfortunate angles. 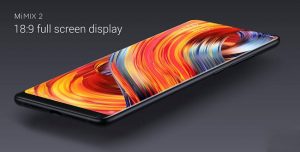 The Xiaomi Mi Mix 2S boasts of top hardware. It is one of the first phones to be launched with the latest Qualcomm Snapdragon 845 SoC. It has eight-core chips which run at up to 2.8 gigahertz and also the Adreno 630 GPU. Xiaomi has explicitly highlighted the fact that Snapdragon 845 (SDM845) can offer great performance, citing the peak of 277,178 points achieved in the AnTuTu benchmark.

Xiaomi has also stated that the Mi Mix 2S can perform artificial intelligence (AI) related tasks too, courtesy of the Qualcomm SoCs. The phone has 8GB of memory and up to 256 GB of internal flash memory, which is expandable via the microSD. The phone has two SIM card slots.

Xiamo has also used the latest technology for the cameras. The new Sony IMX363 camera sensor has been used. It provides a resolution of 12 megapixels with a pixel size of 1.4 microns and it will be able to capture more light. The Dualcam is has been placed vertically and the flash is in the middle. The secondary camera employs a Samsung S5K3M3 sensor. It comes with F / 2.4 aperture and 1.0-micron pixels. It uses dual-phase-detection autofocus and it will be able to focus very quickly and precisely.

Xiaomi wants the Mi Mix 2S to stand out in the photography sector. The company cited the test results of 101 points achieved by the DXOMark experts to highlight the fact that the phone produces high-quality images. The pictures that are taken from the phone come out crisp even in very poor light conditions. This is something of a feat as even high-end phones struggle in poorly lit places. DXOMark can testify this. So, the phone can surely give Apple’s iPhone X a run for its money.

Xiaomi has utilized the AI capabilities of the Snapdragon 845. This has enabled the camera to give great results. In fact, it is said that the smartphone can recognize 206 different scenes and distinguish between 25 categories of objects! This means that the phone will always be ready with the right settings for the picture when the autofocus is used. Apart from that, the camera of Mi Mix 2S also has a four-axis stabilization.

The front camera has a simple 5 MP sensor. Apart from that, the phone has Bluetooth 5.0, NFC and Gigabit WLAN (AC). The battery is 3400mAh. Wireless charging is also supported. For this, Xiaomi has also launched a really cheap wireless charging pad. It costs 12 euros.

The phone runs Android 8.1with Xiaomi’s in-house MIUI interface. It is not know if and when the phone will be launched outside of China. 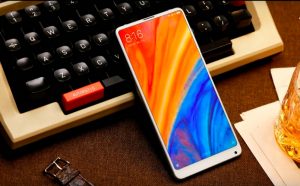