Zuckerberg Vs Cook – Things get ugly between Facebook and Apple CEO 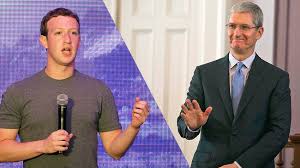 Earlier Mark Zuckerberg offered public apology over the Cambridge Analytica Scandal about the data leak and how millions of people’ privacy got breached due to the scandal. However it seems now it is too much for him and he is unable to take any more criticism. He faced backlash from all the competitors. When you are in a very competitive industry it becomes very difficult, as the rivals companies are always on the lookout to exploit even the smallest of the things. So when Tim Cook gave some blunt comments about Facebook over the data breach,  he was quick to respond this time, not apologetically but in the same manner resulting in what media is terming as Zuckerberg Vs Cook.

According to Zuckerberg, the comments made by Tim Cook were glib. Cook took a dig at the Facebook policy which according to him treated the consumers as money making machines and gave to much attention and freedom to advertisements. However according to Mark Zuckerberg this is a very glib comment. He thinks that Facebook is, unlike Apple, not charging huge amounts from the consumers. So getting the money from ads is the only way through which Facebook can make some money. Here are the arguments given by Zuckerberg in his own words.

“having an advertising-supported model is the only rational model that can support building this service to reach people.”

The Facebook CEO continued his pushback against Cook by saying, “If you want to build a service which is not just serving rich people, then you need to have something that people can afford.” He added, “At Facebook, we are squarely in the camp of the companies that work hard to charge you less and provide a free service that everyone can use. I don’t think at all that that means that we don’t care about people.”

There is really no end to this debate. The truth is that Facebook has messed up big time, and the rivals are having a field day out of this mishap. Now the main thing is to wait and see if Facebook is really taking any measures to fix up this situation.